A super slow train took me to Smolensk overnight and well into the next day. The day was not a particularly fine one in terms of weather. But that of course was not the reason why I was delinquent in Smolensk. Let me keep the suspense for a little bit more till we get to that point while travelling across the city. For some time now I have been meaning to visit this city on the border with Belarus, one of the oldest in Russia and constantly popping up here and there in the tormented Russian history. First mentioned in the chronicles in the year of 863, it did not preserve much since that time, as you can imagine. 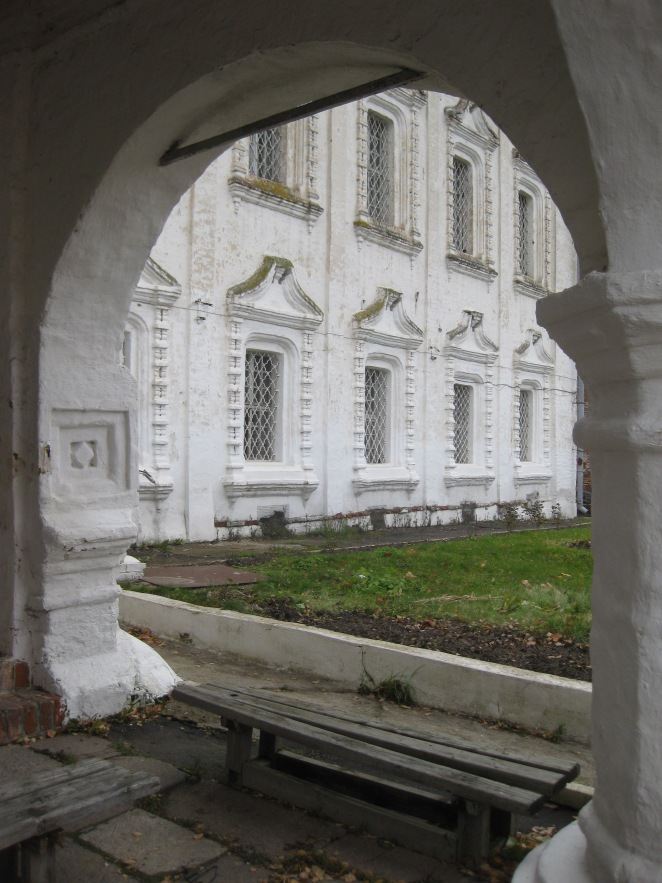 However, Smolensk does have a certain frontier atmosphere, testifying of all the various influences it has experienced throughout the years (Lithuania, Poland…). Its position on the Dnieper river, an important waterway of the trade route from the Varangians to the Greeks, has brought wealth and fame but also attracted too much attention from those who craved to get hold of both.

The first sight you catch when you arrive (not counting the railway station itself) are the two oldest churches of the city, Peter and Paul (12th century! on the left in the photo above and below) and St Barbara (16th; to the right), standing almost side by side and pretty far off the center and the walls of the fortress surrounding it. Just like Novgorod the Great, the Tatar-Mongol yoke did not destroy Smolensk (although Napoleon and Hitler were more successful) and so it boasts some of those pre-Mongol churches hardly to be found anywhere else in Russia. 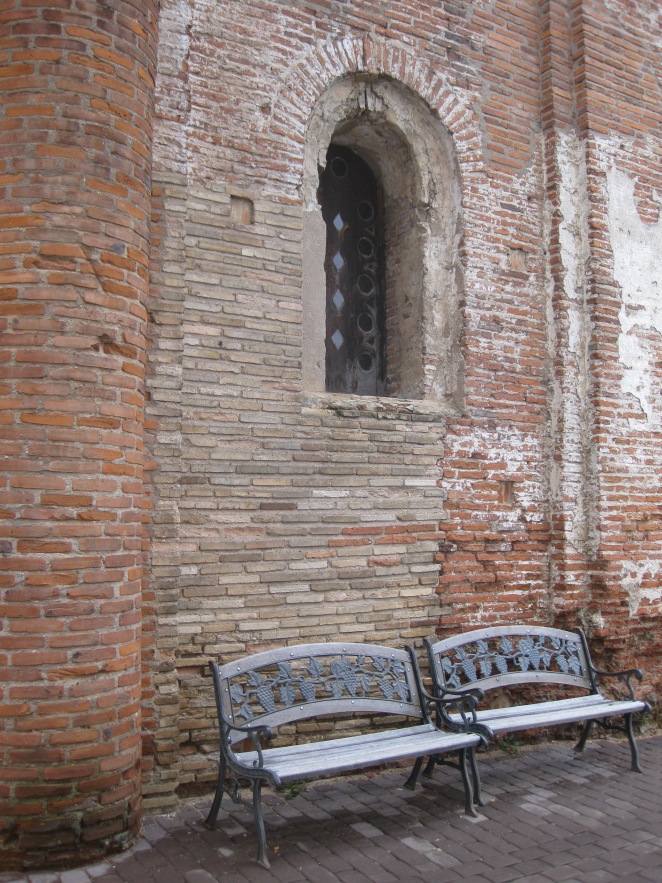 After a short pause at a very Spartan motel (see below) I put my hat on together with the hood to make it across the Dnieper river. Dnieper has always been in my mind going side by side Ukraine and Kiev in particular. But then some Russians are not sure if Smolensk is in their city either… So, to cut this long story short, Dnieper takes its source in the Smolensk region and then flows across Belarus and Ukraine into the Black Sea. And here it is in its very beginning:

Just noticed the crazy bushes along the Dnieper river embankment that recklessly decide to blossom in snowy hazy November. And here’s a part of the renovated fortification wall that used to surround a really vast chunk of the city. I took this wall as a guideline for my itinerary throughout Smolensk and so followed it from the North clockwise. 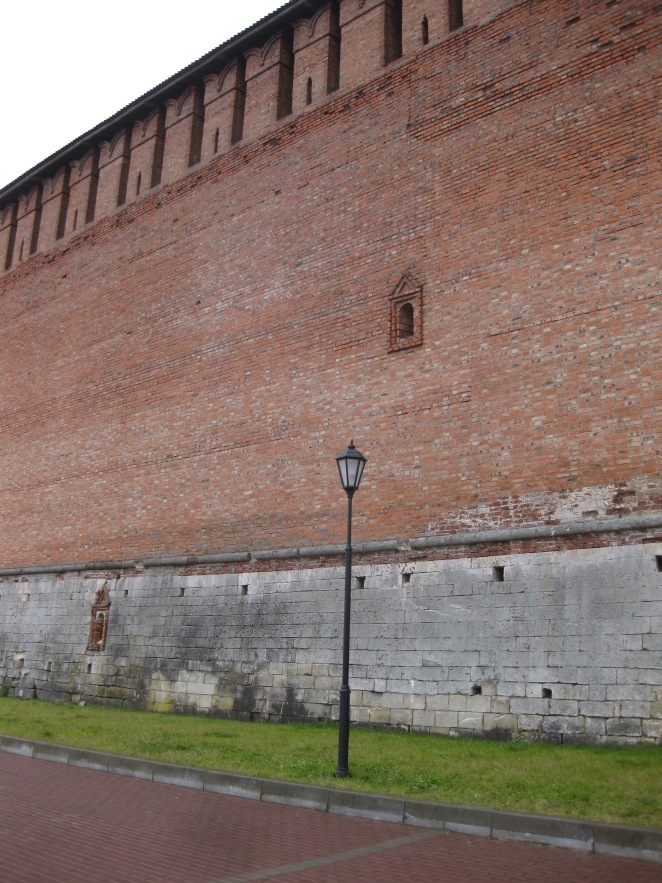 The walls were constructed by the same architect who created those of the so called White Town in Moscow earlier in the 16th century. Only this time Fedor Kon’ thought bigger and taller, with much more towers, thus creating a real fortress around the town (which it really is compared to smaller Moscow Kremlin)

And here’s the weirdest part of the north wall – the classicist Dnieper Gates flanked by two bell towers on both sides, literally growing from the 16th century wall. The gates now house a church school. 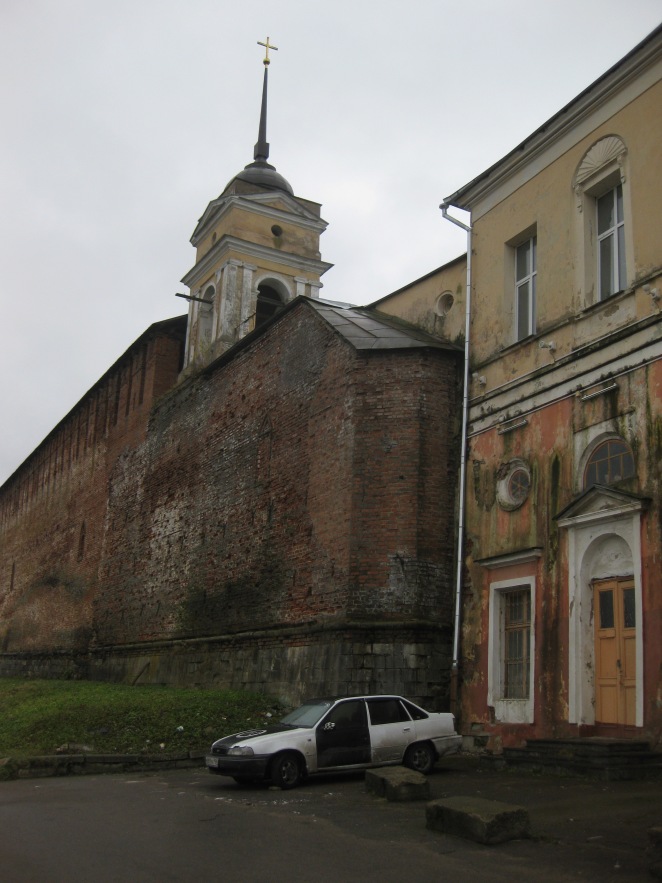 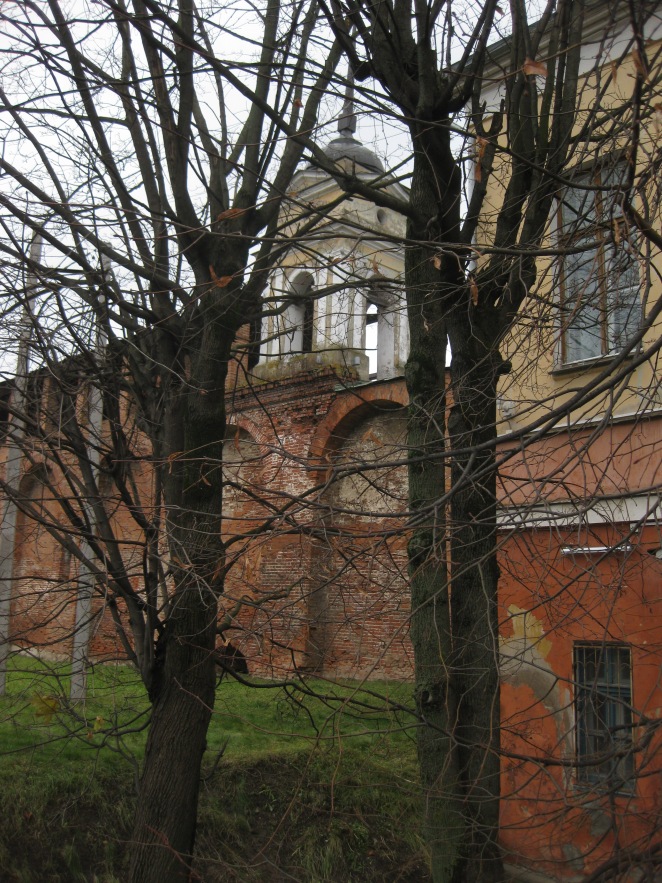 Following the northern wall clockwise I came to this hilly part of Smolensk looking pretty much like a village, with a typical rural shop where you can normally find almost everything you need.

View over the Sobornaya Gorka, a hill with the Assumption Cathedral. Right underneath me was a man lying apparently breathless and / or drunk beyond repair. On a deserted street below a couple was waiting for the emergency car to come. I didn’t see what happened next.

Out of 38 original towers only 17 have survived; this one is in the South-East part of the wall: 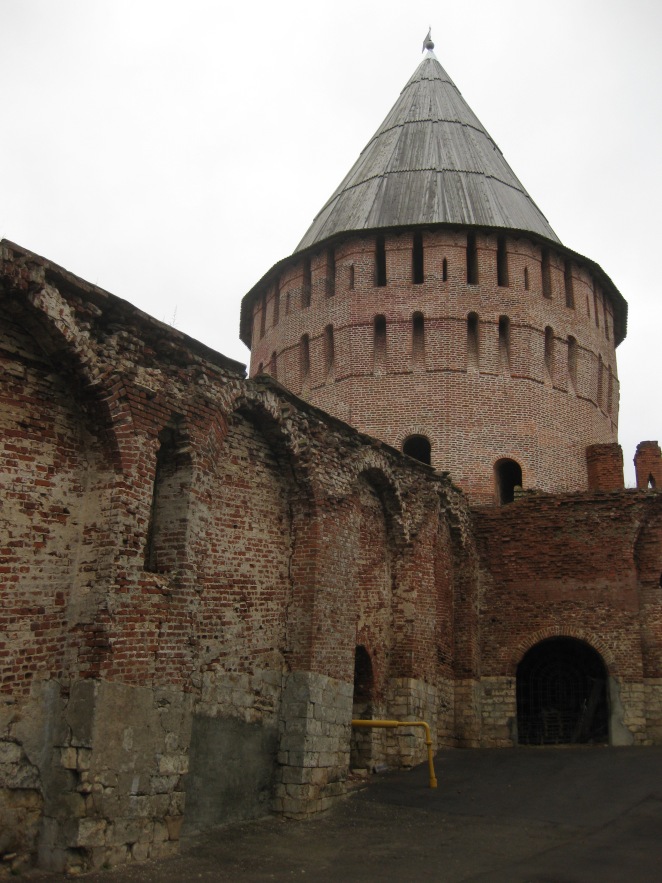 And here you can illegally climb the ruined stairs and get a view over both sides of the wall – illegally, too. But no one cares.

Avraamiev Monastery (founded in early 13th century, rebuilt in stone in the 18th) 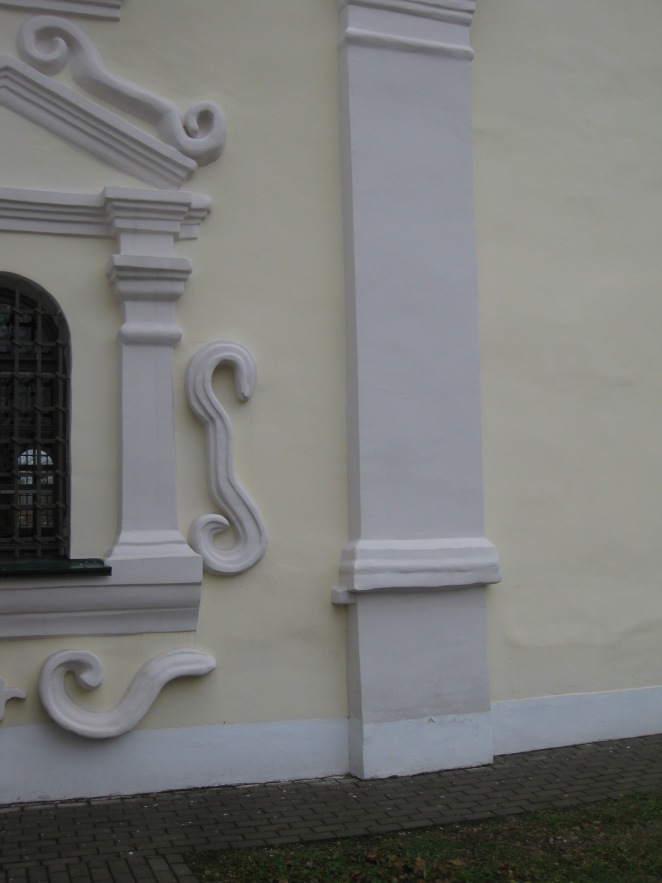 With a drive-through arch: 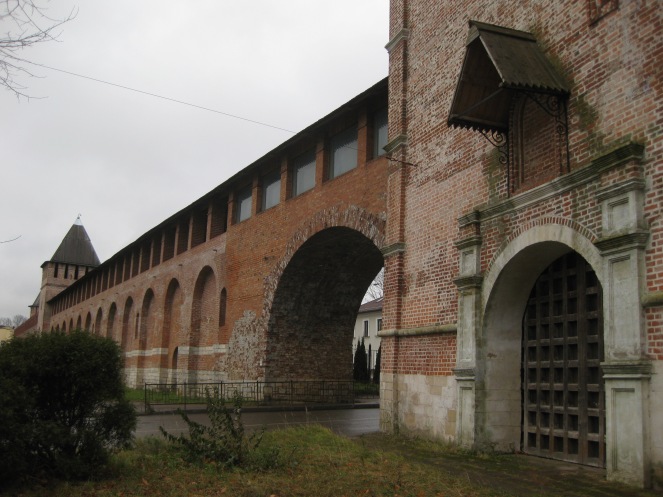 And a gorgeously Soviet store selling sports goods and clothes. By the time they realized it was time to renew the shop window design, it has suddenly come back into fashion again (the black & white posters are there for a very very long time):

A door leading into a 1930s Gosbank (State Bank) building – still used as a bank premises:

One of the most recognizable buildings in Smolensk – the 1930s constructivist ‘House with Lions’ as it is known here. What a combination! A lady waited patiently while I was taking this photo and then entered – too fast for me to follow in her steps and see what Smolensk avantgarde looks like. 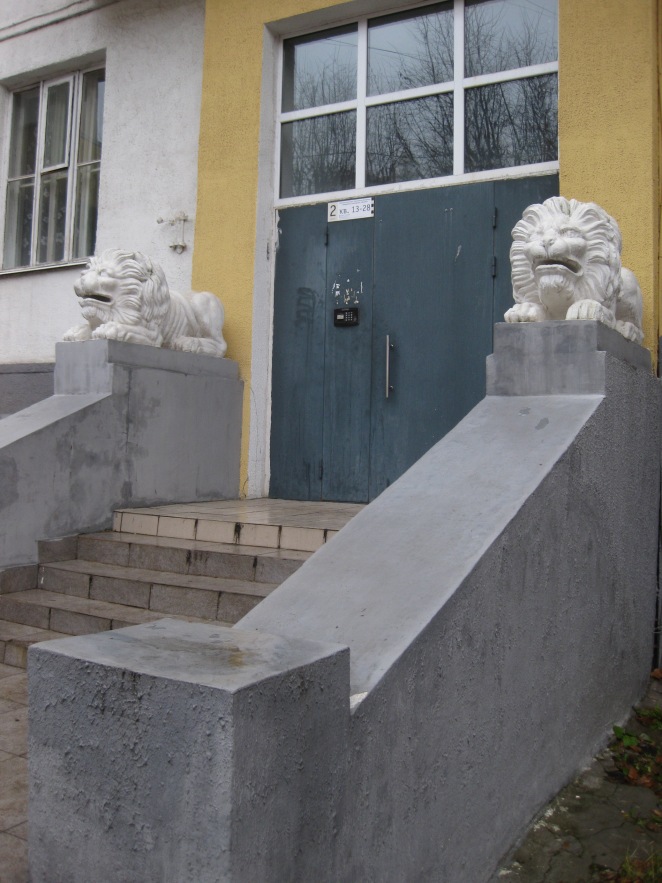 Moving along a rather long Kommunisticheskaya (Communist) Street, which changed names at least 6 times across the centuries, including Bolshaya Dvoryanskaya (Nobleman) vs Bolshaya Proletarskaya (Proletarian), Sotsialisticheskaya (Socialist) and Stalina (Stalin). That street was not the lucky one for me – as we will see later. This is a local arts school in a neo-Russian style red brick building: 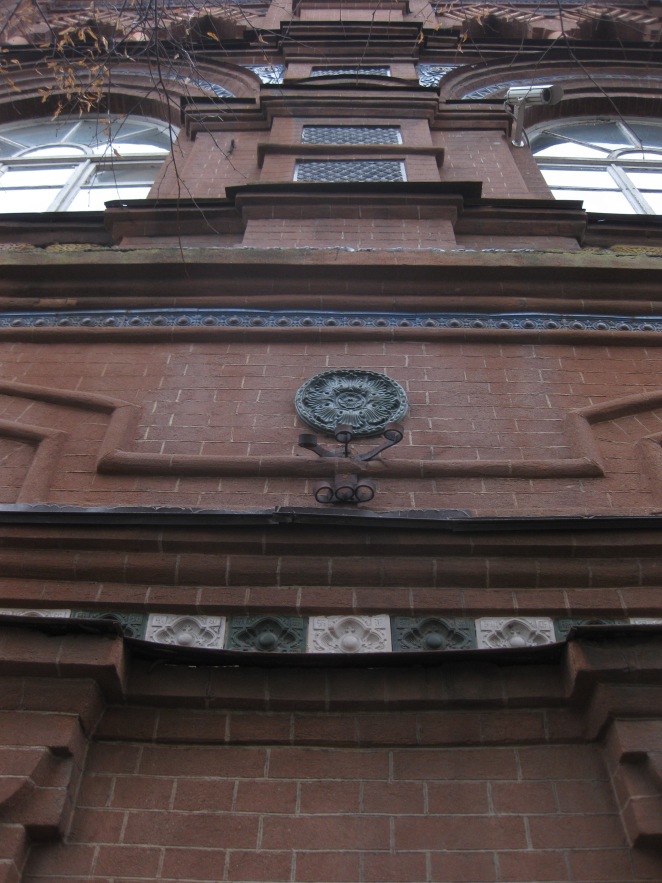 An early 17th century Gromovaya (Thunder) Tower and a monument to Fedor Kon’, the architect.

Moving further along the South-Western wall: 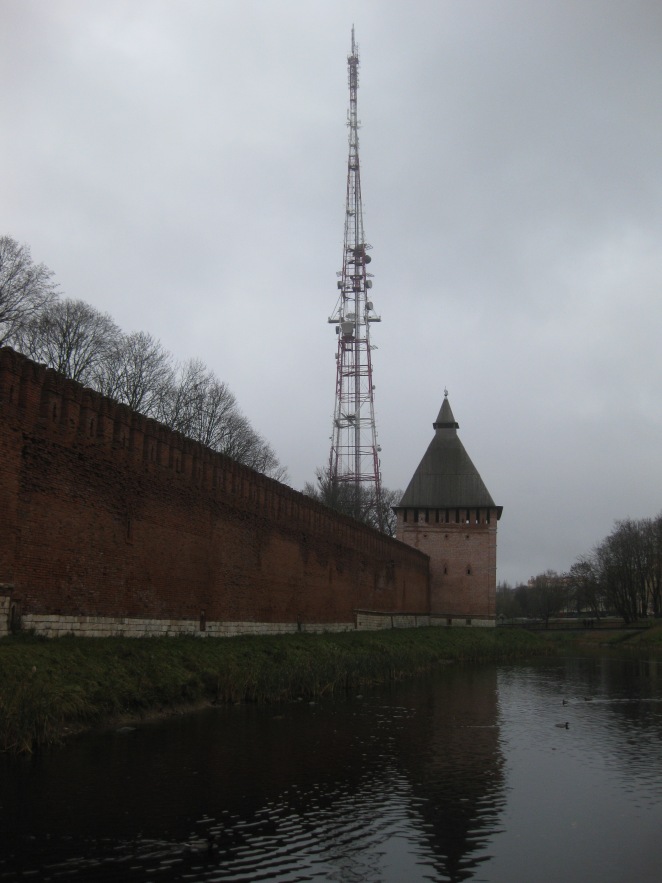 When I realized I’d seen most of the sights located in the center, I decided to move back and explore the old merchant mansions along Bolshaya Sovetskaya. Little did I know that after passing along this Fine Arts Museum on the same Kommunisticheskaya street I would get too distracted by a Stalinist building on the right and a neo-Russian on the left plus a 16th century wall lurking somewhere over there that I would nonchalantly cross the street where it was not supposed to and… bump into a policeman. So here we go, my first fine and about 20 minutes of the precious daylight wasted while another policeman was taking down my name etc and telling me stories about St Petersburg – veeeery slowly. No, they were not impressed that I was a tourist from another city and the fact that it was a state holiday did not make them drop the whole thing either. Delinquent! 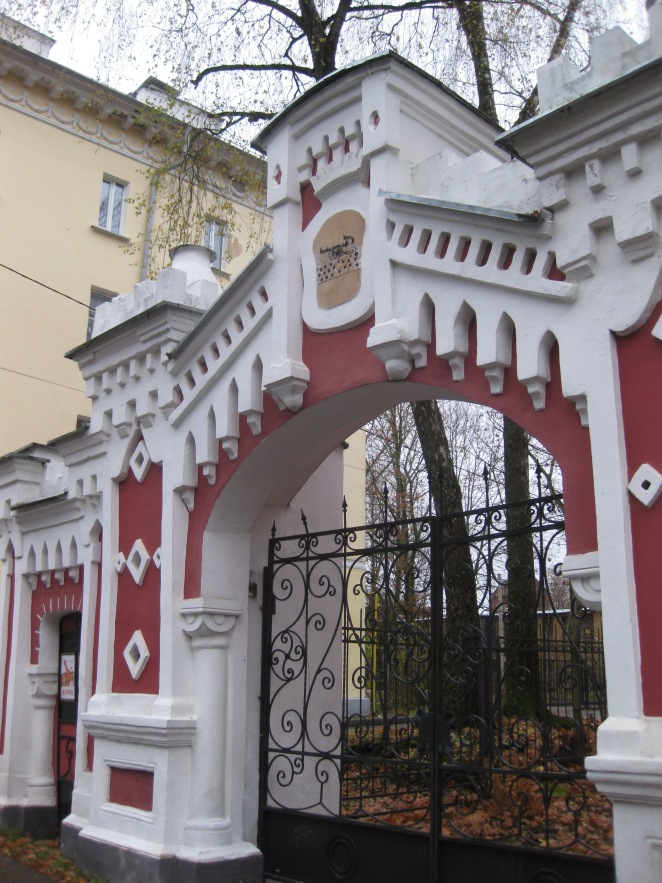 Did you know that if you pay your fine within a short period in Russia (and you can make it online too) you only pay 50% of it? Well, I did 🙂 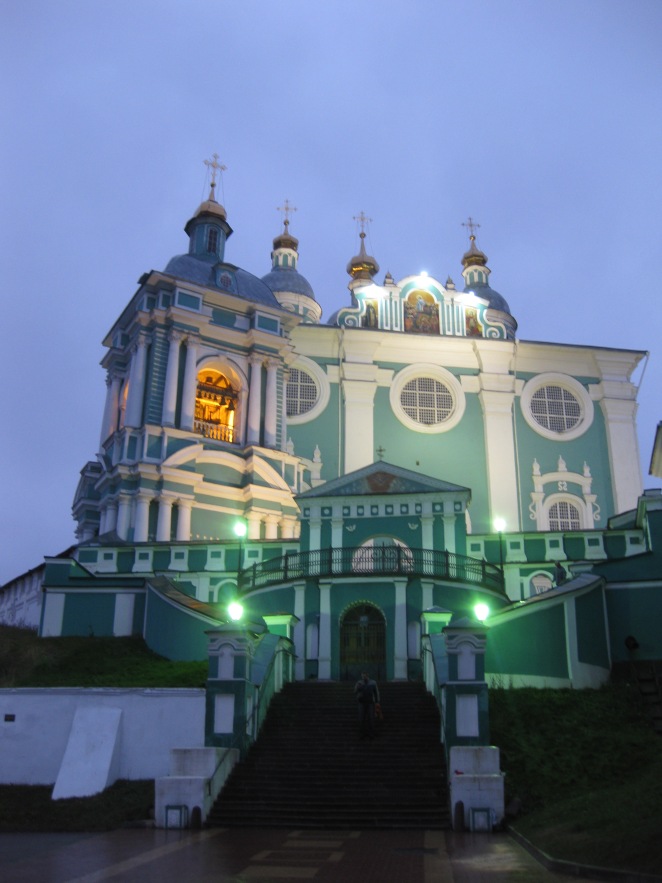 The 17-18th century Assumption Cathedral, all gold inside. My last shot in Smolensk after which I crossed Dnieper once again to the railway station district to wait for my late night train that would take me across the border to Belarus. I didn’t manage to sample anything particularly remarkable in Smolensk (only gobbled down something quite similar to panforte – but it was imported from Minsk), nor did I get any postcards. No local market either. Hm, seems like Smolensk did not pass my test! Or was it just the weather with wind and snow right into my face?

Not recommended in Smolensk: The city has a very scarce selection of accommodation options. So much so that you either end up in an overpriced ‘euro-standard’ hotel or in a very dilapidated motel-like place (which I did). Unless you have your train to catch the same night (and IN the night too), do not choose Mini-Hotel na Avtovokzale. It is very convenient for those travelling by train or bus but definitely to be avoided if you care about your own self.