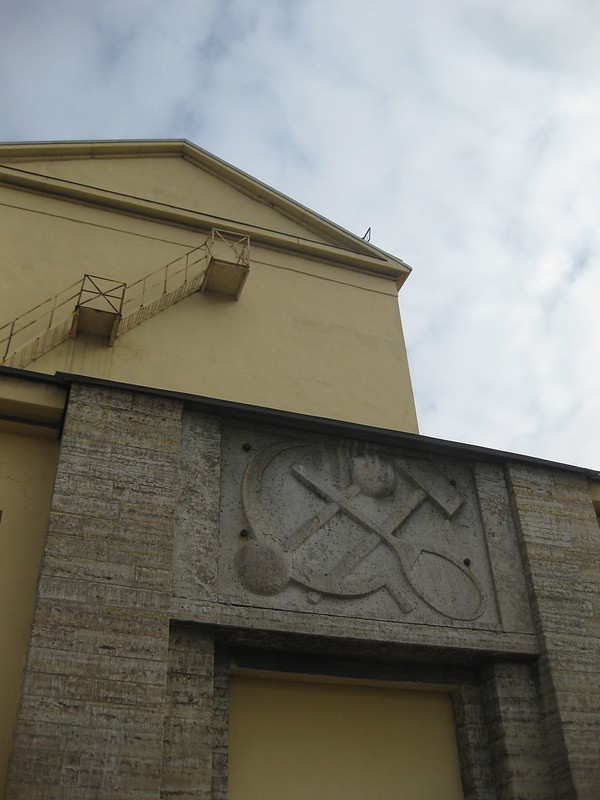 I started this post back in June 2016 when I was discovering new places along the red line of the St Petersburg underground. I took photos inside Narvskaya metro station having in mind an idea for a new walk – and later a blog post – around that area called Narvskaya Zastava (i.e. a frontier post leading to Narva). Which only happened in March 2017 when we went on the Avant-Garde Architecture excursion with the St Petersburg through Engineer’s Eyes project (the same one we went to re-discover the gorgeous Vitebsky railway station with). Unfortunately, the excursion did not turn out to be a huge success – neither in terms of the participation (we were just 7) nor with the actual participants. However, it made me see those crucial avant-garde place that I had been meaning to visit. 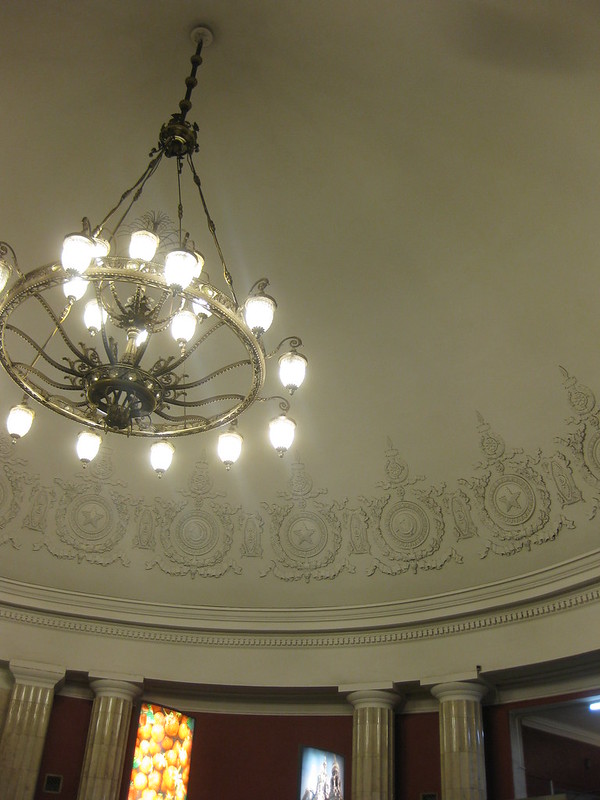 The excursion started from the Narvskaya metro station, one of the first stations in the city opened in the south of the city in 1955. It was not built in the constructivist or any avant-garde style at all (although the very first Moscow stations were) but I think it’s worth stopping here for a while – especially in the light of the recent events in St Petersburg metro. Narvskaya’s ground pavilion looks pretty classical and routinely Pantheon-like, a leftover from the Stalinist architecture which after his death was doomed to die too. Very soon Nikita Khrushchev would take over the architectural line (as well as the power) and bend it in a very different direction, creating cheap faceless block of flats that people were only happy to move in. They are since called khrushchevki. 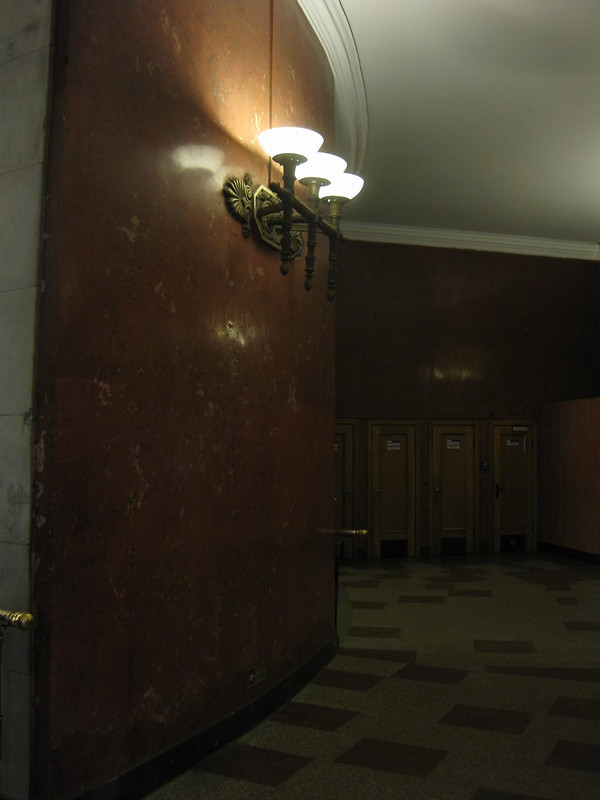 I bet those doors in the background are there from the very beginning. I don’t normally like those bronze decorative things but here they look right. When you enter the station and go down, there are these marble bas-reliefs with sturdy never smiling (even the children!) Soviet people of various professions. All so solemn and out-of-this-world. As this entire district surrounding the station was largely a workers’ one, the station’s theme is all about labour and its glorification.

I like these semi-circles of lamps, they look kind of art-deco-ish.

It is true that the first users of the Leningrad metro were rather its visitors (and admirers). After all they were meant to be such – as these museums under ground, these temples of culture were supposed to cultivate and instruct those who would take the metro to work – and, well, work work work 🙂 Not much time for museum-going, you know.

Now, more than 60 years later, people still wonder at these temple-like first stations of the Leningrad subway. We don’t have that an abundance of Stalinist stations compared to Moscow, but still you can spend quite a lot of time discovering those original stations. And not only them of course!

It’s a pity we use metro rather as… users now, we don’t have time for the details and rarely do we stop to admire them. The symbols keep loosing their meaning and I guess not all of the today’s passengers would tell you what this 1955 stand for. A similar grate but in silver can be found inside the Vosstaniya metro station.

We didn’t really need a bus for this excursion really – it can be made on foot with no problems, most of the objects being pretty close to each other. Our first stop was at this school built to cater for the needs of a fast-growing workers’ district in 1927 – hence its name celebrating the 10 years after the October Revolution (Desyatiletiya Oktyabrya). They say it was built in a shape of hammer and sickle but there’s no official proof to that. 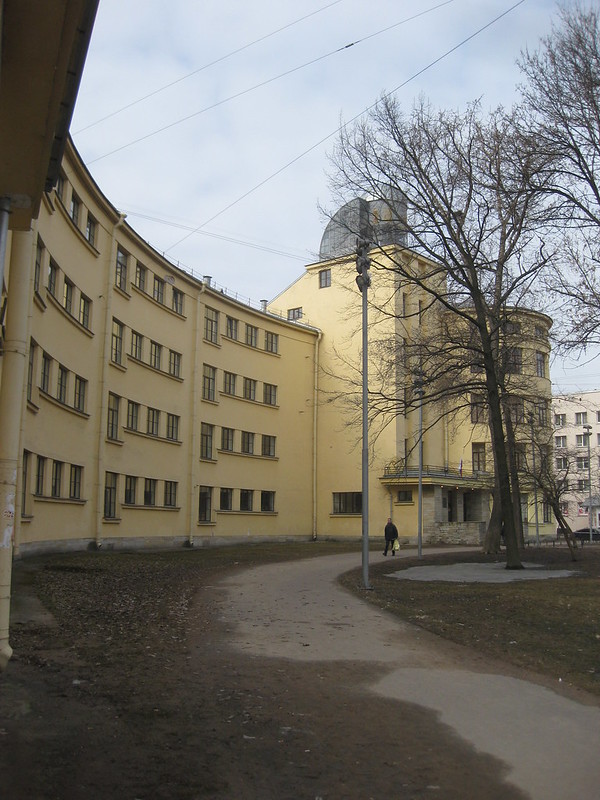 The school is still functioning! It has this rounded wall with classes and an observatory tower (not used anymore due to light pollution) and there’s this weird interpretation of the hammer and sickle symbol pictured on the first photo of the post. The same architect, Alexander Nikolsky, created also a super progressive banya for 4000 customers a day located in the same district – the banya functioned until pretty recently but is now in such a state that I didn’t even try taking a photo. 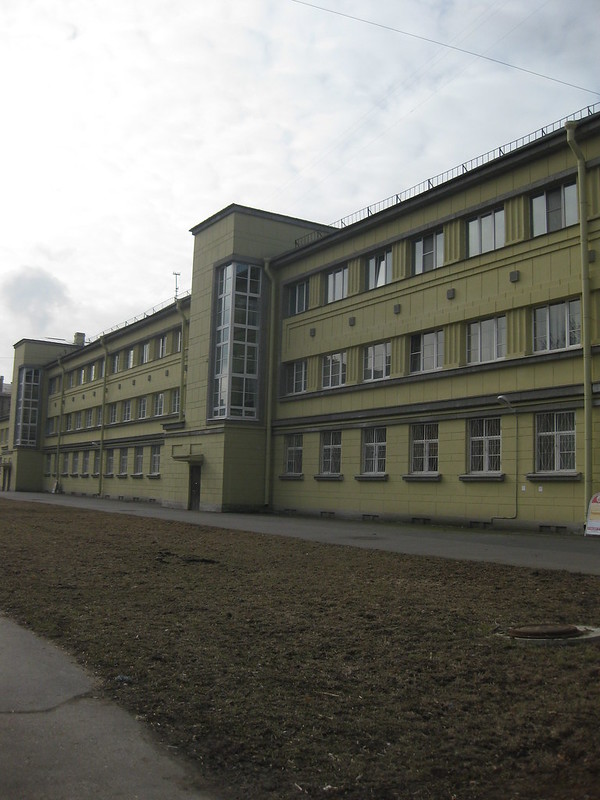 This is yet another constructivist public building in the district – a 1928-33 profilaktory (a health institution for preventing illnesses), now a hospital. With all the strive of that period for better and more effective, this profilaktory was designed to have continuous windows for more light (which never happened) and separate entrances for different groups of patients, etc etc. The years have had their toll on the building and now it has lost its avant-garde looks. 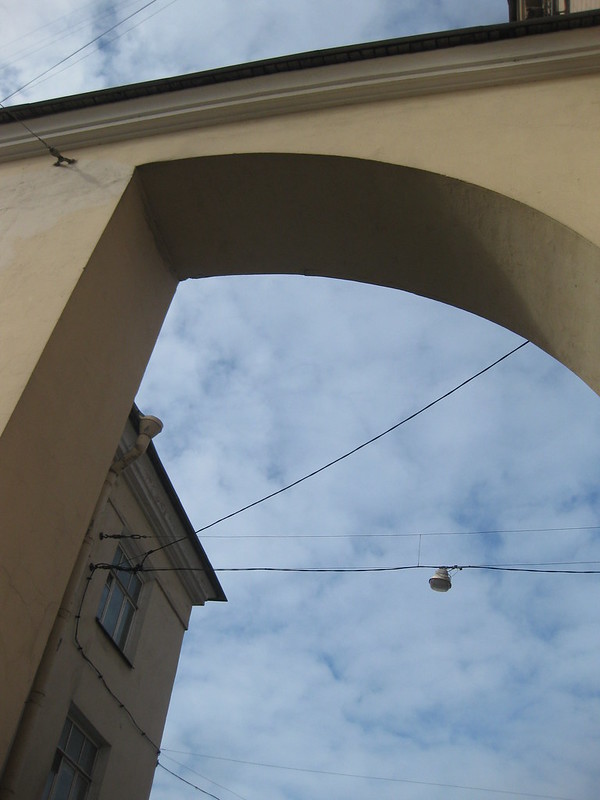 Our next stop was at one of the local workers’ residential areas / townships or zhilmassiv. Like the one near Yelizarovskaya metro station (built in the same years, 1925-28) it has its own style and a signature detail: a semi-arch ‘growing’ from the wall. Nikolsky also participated in this project called Serafimovsky Gorodok as well as Gegello and Simonov. There are 7 houses and a laundry, creating a lot of space in the middle for a playground. That was one of the first projects of building an entire district in the city. 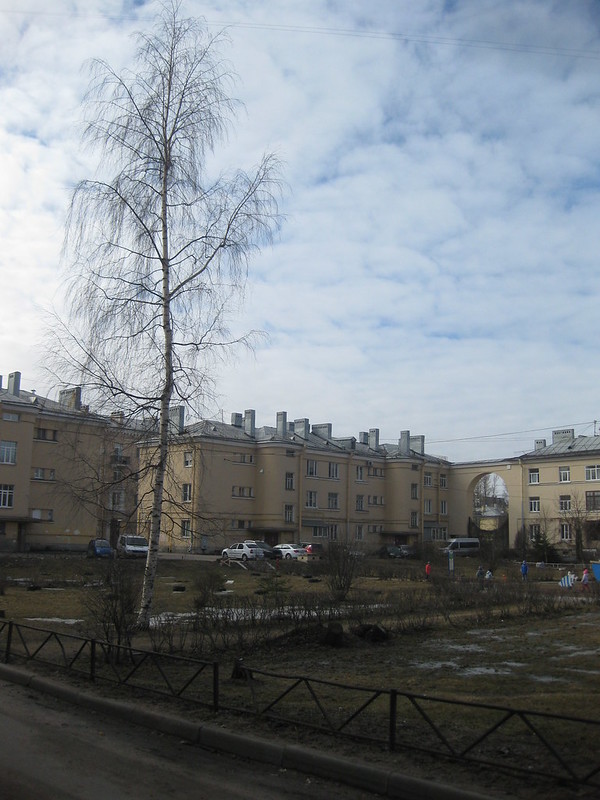 Same architects were simultaneously building another workers’ township just a few blocks away, on Traktornaya Street – for the workers of the nearby Putilovsky, later Kirov Plant. Same signature semi-arch: 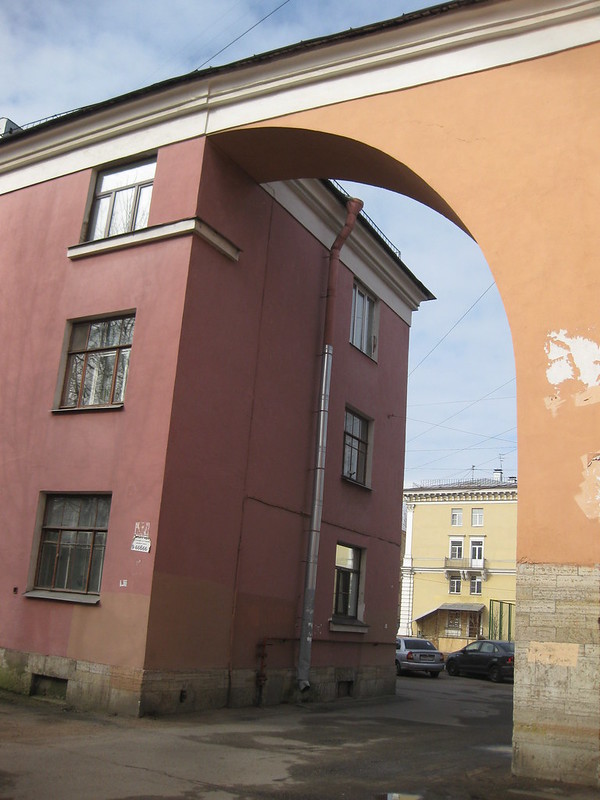 And the rounded stairwells with a triangular canopy: 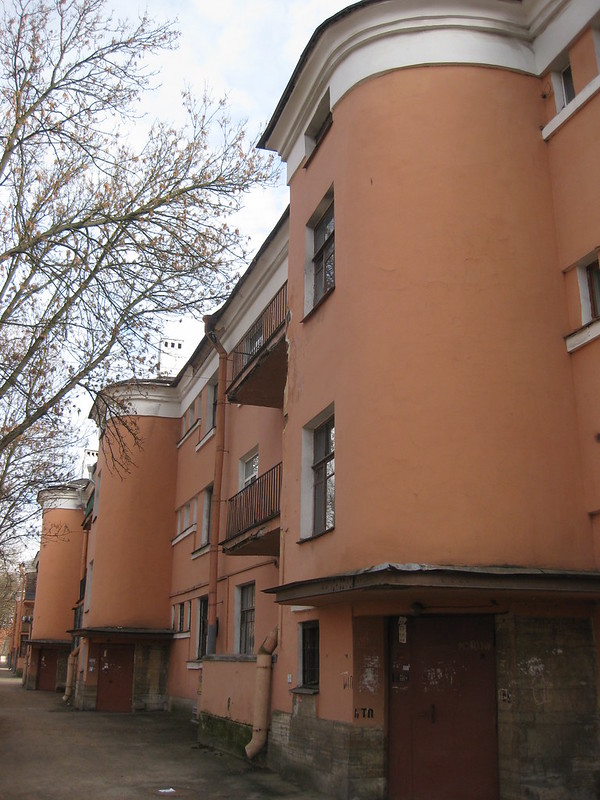 This project is different in that it creates an entire street of 16 houses and not a square district with a playground in the middle. These neat houses came without bathrooms but with a niche for a perspective bath tub because at that moment the Soviet industry was incapable of making tubs 🙂 It’s a pity that with the active construction all across the district and the cars parked all over the place, this street doesn’t create the same effect anymore – it used to be some kind of a local landmark, with that school mentioned above at one of it’s ends and an arch at the other. 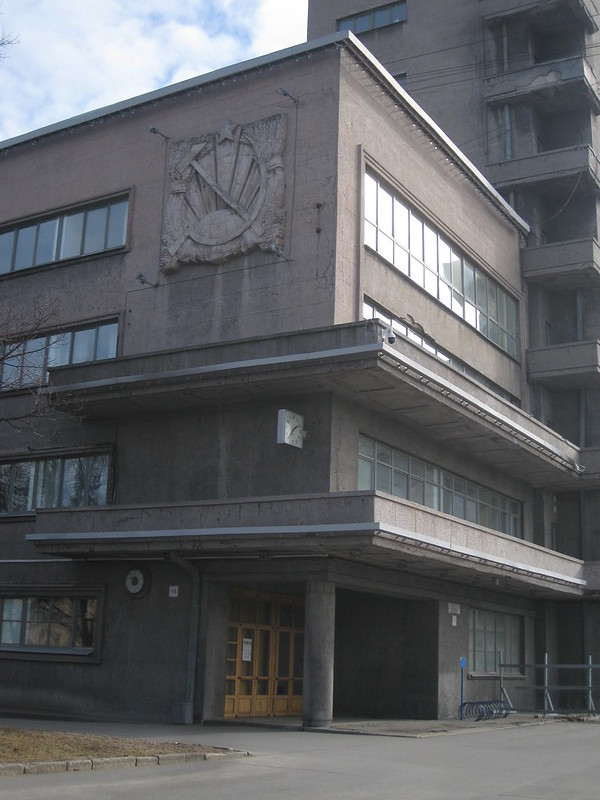 Another must-stop of the district is the House of Soviets with a tall tower and quite a different aesthetics as it was built already in the early 1930s by architect Noy Trotsky (not to be confused with Lev Trotsky), known for his project of another House of Soviets in the Moskovsky district. They say that the building was faced with ground tombstones of a eradicated cemetery… 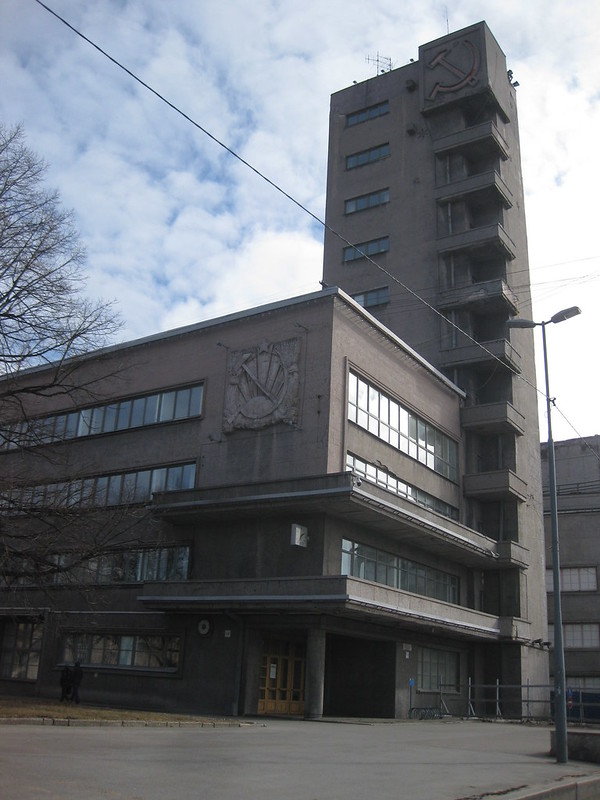 I didn’t take any photos of yet another landmark of the Narvskaya metro station district which is situated right in front of the station pavilion – the local fabrika-kukhnya, a factory kitchen catering for the busy workers and their families. It is now so defaced and turned into such a mess of various signs that you can hardly recognize the original project by Barutchev, Gilter and Meerzon.  The same trio of architects also created fabrika-kukhnya on Vasilyevsky Island and in the Vyborgsky district. At first I thought these ‘stepping’ windows corresponded to the staircases but actually these are amphitheaters for lectures. 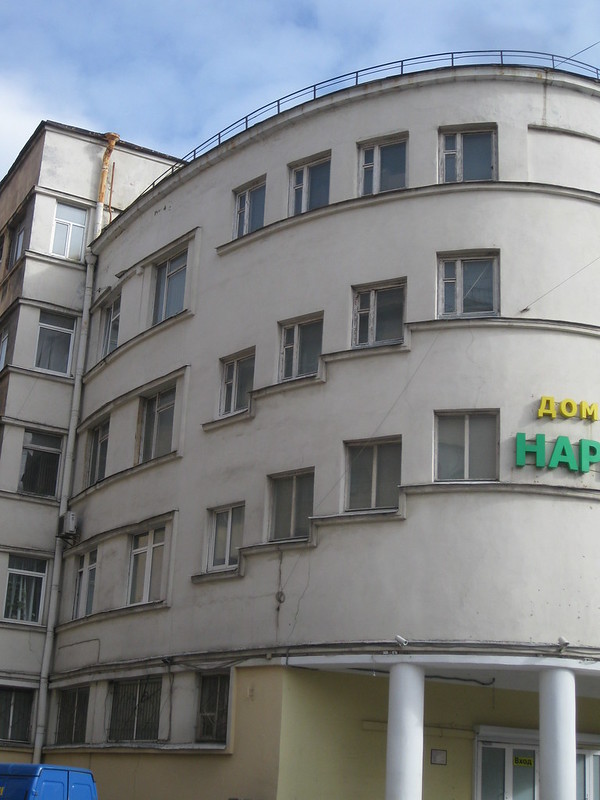 And this is yet another constructivist project hidden behind the buildings on the Stachek square. Created by Gegello and Krichevsky in 1930-33, it housed some technical education institution and now it’s a store selling furniture… The ‘head’ of this building looks pretty familiar – it resembles Erich Mendelsohn’s Krasnoye Znamya factory’s power station on Petrogradsky Island. 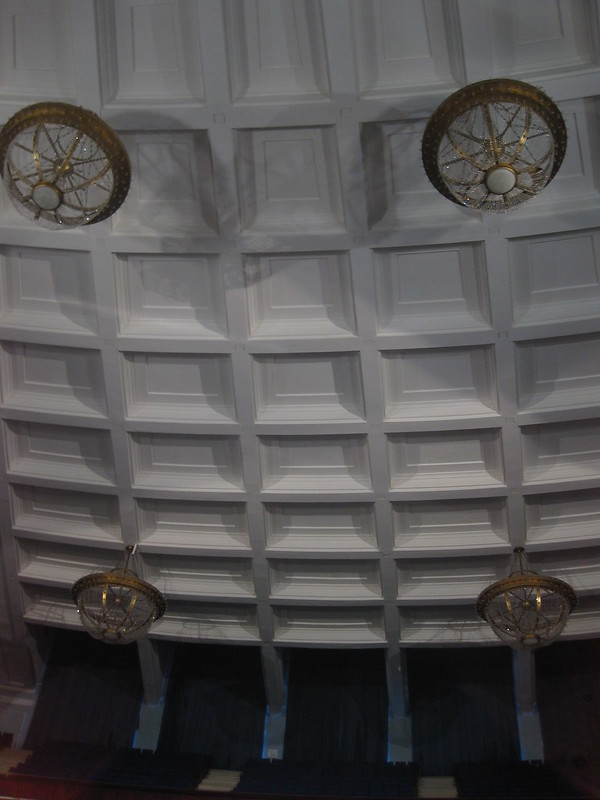 Our ultimate stop was in the local Dvorets Kultury imeni Gorkogo, Palace of Culture named after Maxim Gorky, a must that would adorn every large city of the Soviet Union, otherwise called Dom Kultury, house of Culture, if talking about a smaller town (I’ve definitely written about palaces and houses of culture in one of my posts about Kolpino). We actually had a chance not only to enter the building but also visit some of its parts hidden to the general public. Although this originally avant-garde creation of 1925-27 (architects Gegello and Krichevsky) has been heavily uglified by various add-ons throughout the years (this is how it looks now), it’s one of the city’s best preserved authentic palaces of culture. 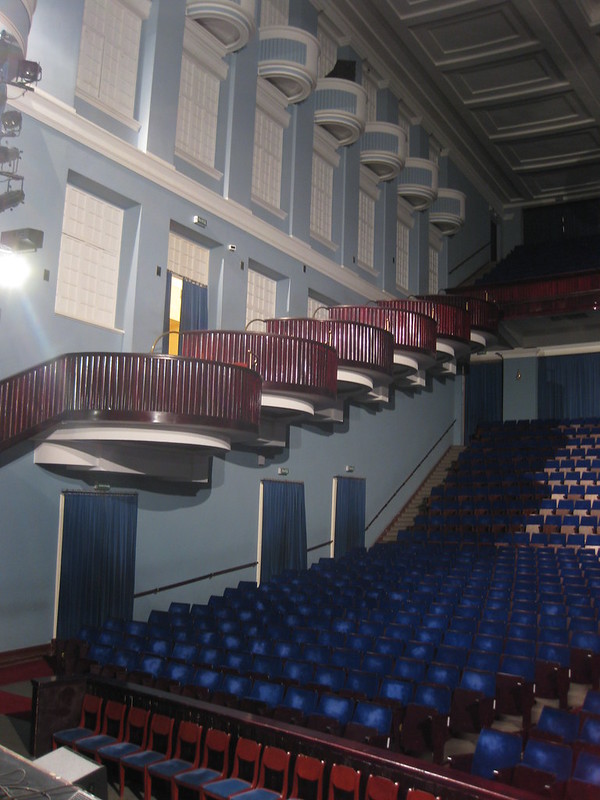 We had a chance to stand on the stage looking into the rows of chairs. These red chairs are here from the 1920s, can you believe that? The ribbon-like boxes look cool. Although I do not really like the color scheme 🙂 I only once was in this concert hall as a spectator – and that was when I knew nothing about the building, which is – as many constructivist creations are – almost like a machine or an organism with many functional sections and layers. 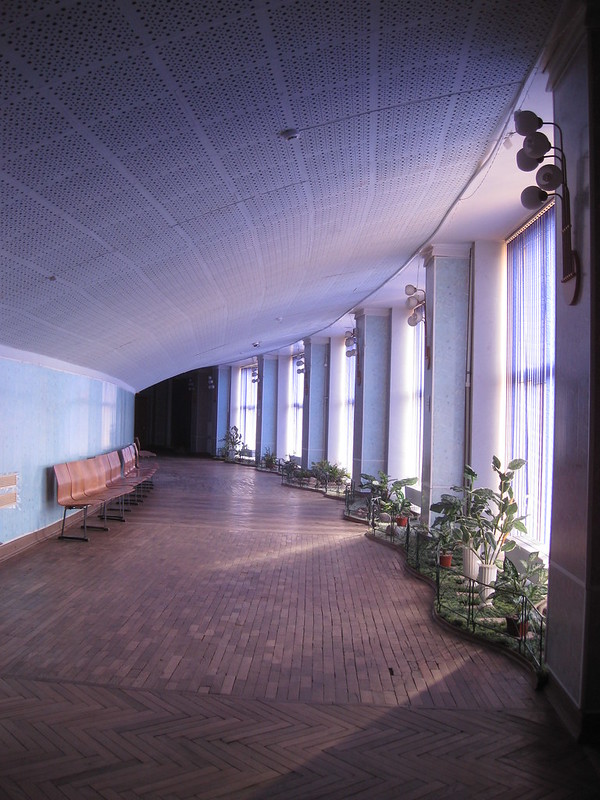 This curvy corridor / gallery uniting two parts of the building is now closed and taken over by the flower pots. It runs on top of the concert hall with its windows looking out to the Stachek square. 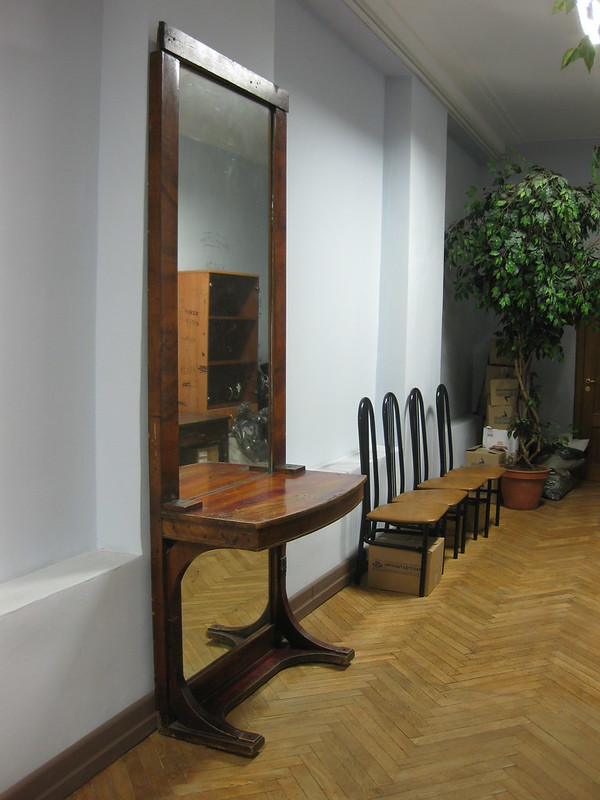 Some remains of the past in the library – it also has wooden bookcases with a 1930-something metal stamps on them. The library looks really sad with its old books and as we could gather – almost no readers at all. And here’s the staircase with the original wooden railing: 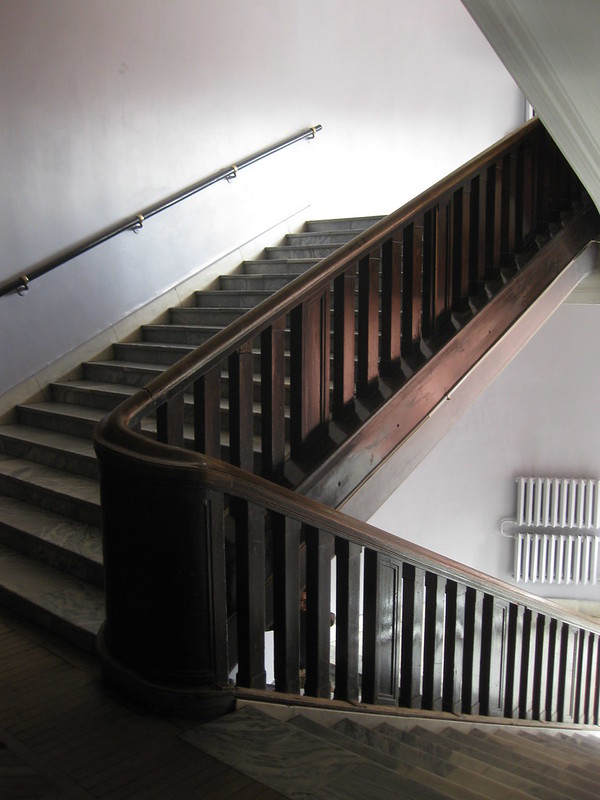 It’s clear that in the today’s world it’s too hard for such an organization to survive without renting out its premises to various shops and clubs, so the building looks pretty patchy both inside and outside. It leaves an impression of slowly but steadily dying organism. Almost 90 years later it still carries out its function as a local center of culture and sports but it’s been attacked by the parasites for too long.