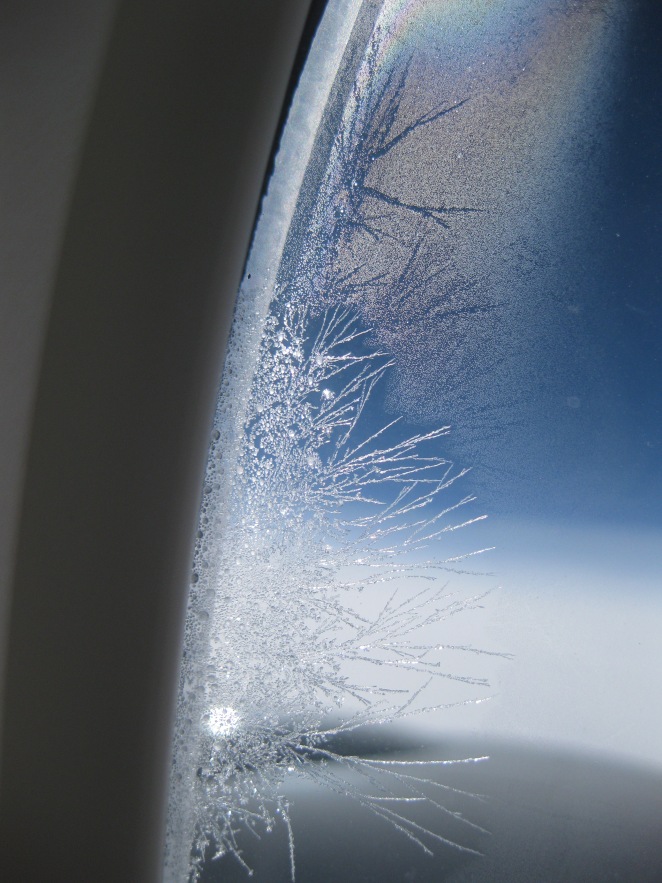 Flying 7 time zones back or 8 hours 30 minutes all across Russia has been the longest flight I’ve ever taken. I flew back to Moscow and Moscow time. One of the thoughts I’ve noted during my stay in Vladivostok was this: “I realized I like railway stations. They always show Moscow time there :D”. And although I didn’t make it all the way to Vladivostok on the Trans-Siberian, I took a train from Vladivostok to its airport, thus symbolically making my way back to where we started from the terminus of the Trans-Siberian Railroad. 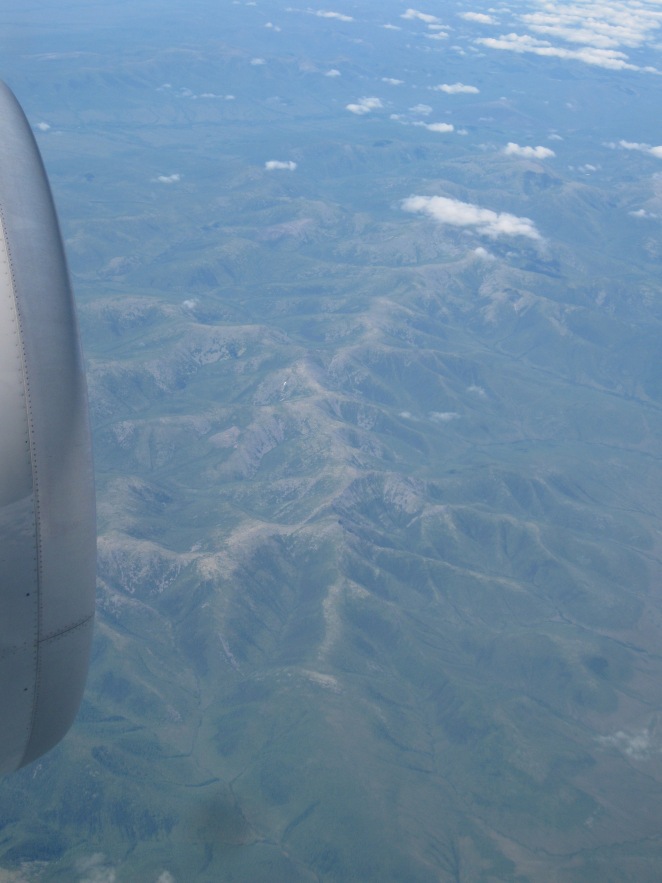 My flight was early in the morning and yet I arrived in Moscow at 10.45 am of the same day! My 8 and a half hours of flight were eaten up by flying 7 time zones back. So I had my breakfast-lunch and dinner and arrived just on time for a second breakfast in Moscow 🙂 By the way, I ordered vegetarian option and by that they meant black bread instead of white bread, no butter, meat and… no bulochka either, what a shame! But it was ok, especially when you realize you’ve been only eating, listening to music (there was a certain David Gilmour playing in my earphones) and watching movies (three!) for 8 h 30 min. It’s a pity the photos I took were mostly of the clouds as we were flying way too high to make even those Novosibirsk-Moscow flight photos. 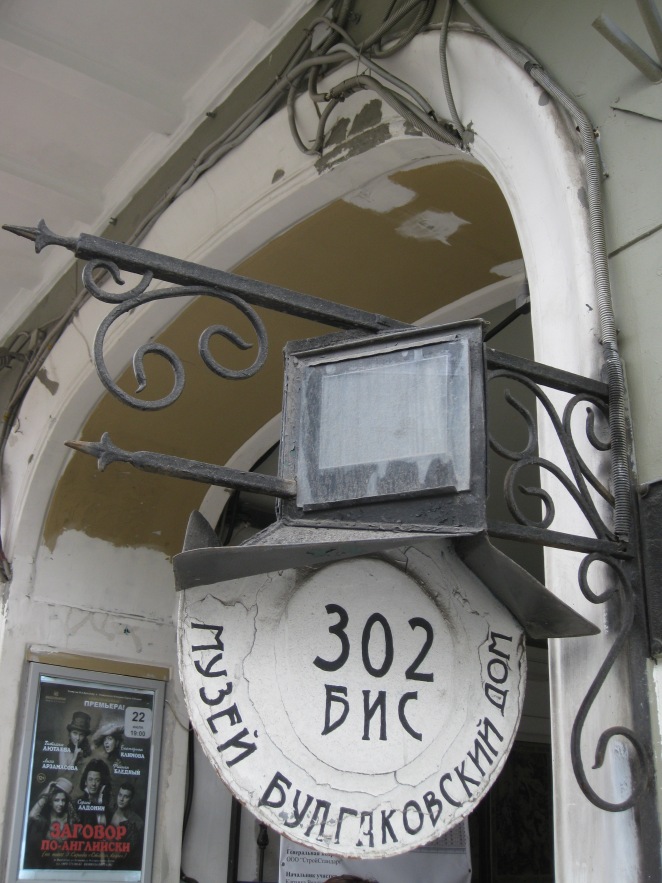 In Moscow later that same very long (rubber-like) day I decided to go to the city center and visit the place where Mikhail Bulgakov lived. In the state that I was in (not really making head or tail of anything) I was lured into another museum in the same courtyard where Bulgakov actually never ever lived cause that was where the house managers would work. 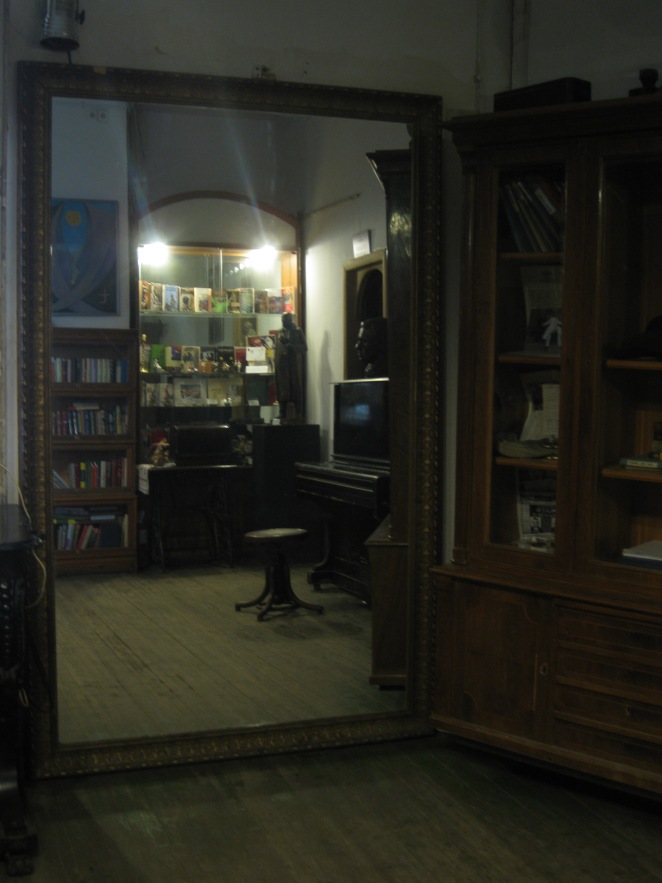 After realizing I listened to an excursion in the wrong Bulgakov’s museum 🙂 I went for a walk and first visited the nearby Patriarshiye Prudy (Patriarch Ponds) where the first episodes of the Master and Margarita novel take place. 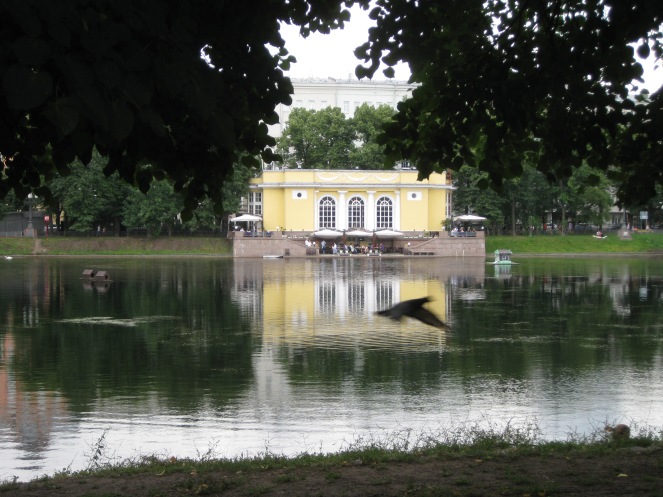 Walking along Spiridonovka Street I came across these gates which look like some Lord of the Rings paraphernalia. And yet they would conduct some international negotiations here in this building as it belongs to the Foreign Affairs ministry since 1929: 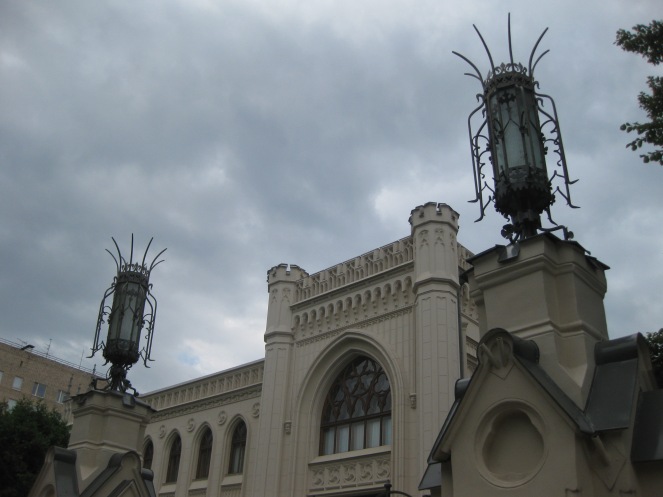 Further ahead – some cozy 16th century corners of Moscow: 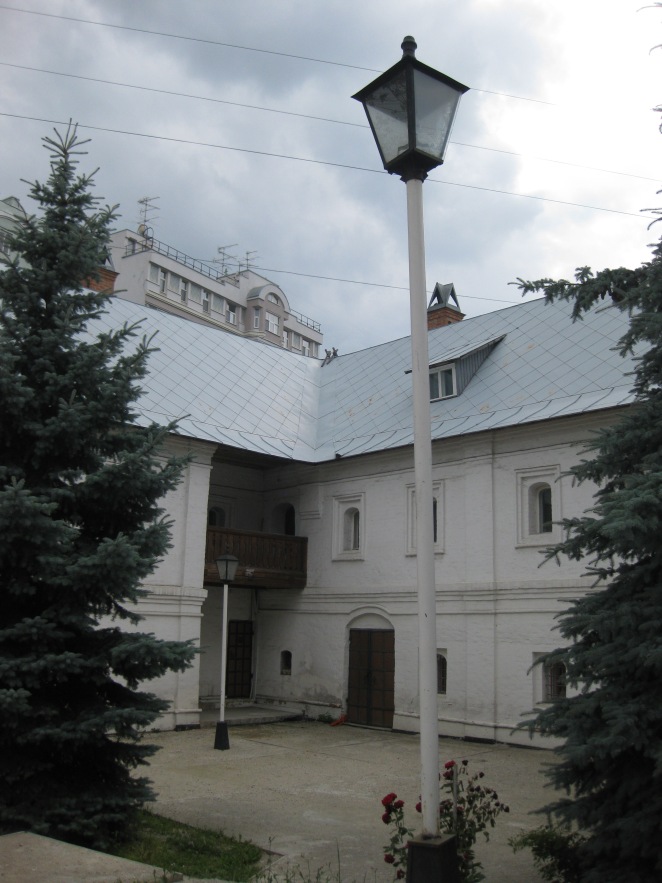 They were not really very strict with their lines back then, were they: 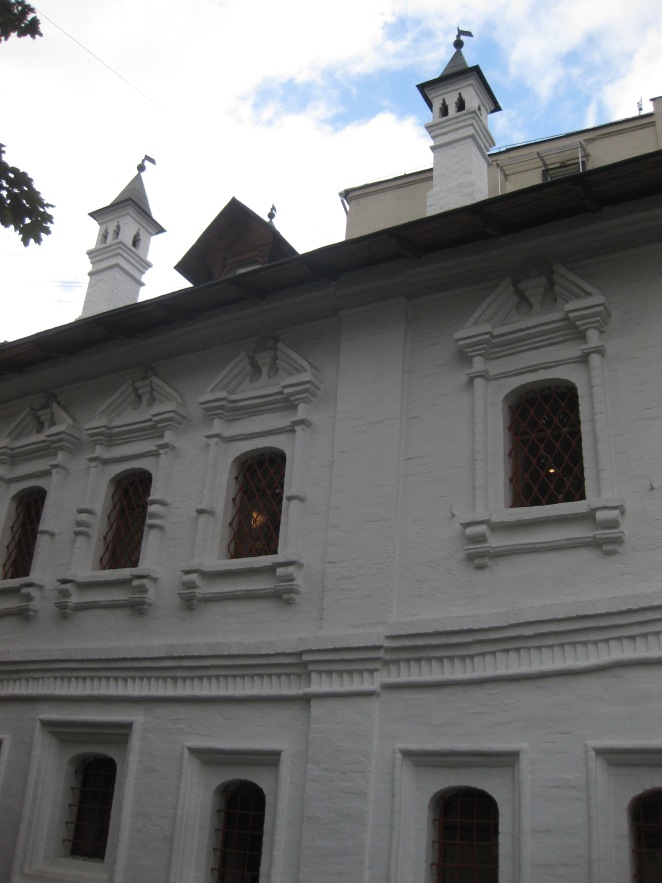 I walked up to the Kuznetsky Most (Smith’s Bridge which is not there anymore but the name remains) and then we finished off my long rubber day with some delicious Greek food. The last train of my trip took me overnight to St Petersburg with a coach full of kids going to see the Northern capital and the summer storm behind the windows. And again it felt so weird to be travelling alone on the train!

I want to say a sincere thank you to my courageous companion. It was your first time in Russia, first time on a Russian train and yet I admire you (and I’ve told you that several times :). Katerinaki dear, you’ve made this trip, seriously! I couldn’t have possibly done the same on my own and I’m glad I could make those 6865 km with you by my side. You added to the trip that wonderful touch that only a friend can have. Thank you for sharing it all with me!

With this post I would like to end my Trans-Siberian Trip series. Ten posts for ten stages and thousands of kilometers. A round trip across the most interesting place on Earth – my own country.

walking round Moscow before setting off to Siberia

moving South and East to the wide and long Volga

beautiful nature of the Ural mountains

first stop in Siberia in the oil & gas capital of Russia

How To: Russian Trains

the day we saw the beauty

and the biggest Lenin’s head in the world

with that very different nature

This trip has been a very enriching experience. Indeed something that I will remember. I will definitely recall the nature part of the journey most of all. Taganay and Stolby, the two nature reserves (parks) that we visited gave us a much deeper insight of the Urals and Siberia than any large city could have done. And Baikal is unforgettable. Nature will never disappoint you regardless of the weather conditions. We enjoyed it with all the rain and mosquitoes and would do the same were we travelling in winter or autumn. I would even add much more nature to such trips. Nature and people.

Visiting smaller cities was quite a smart thing to do too, although there is always this chance of getting bored. When I was planning the trip several months in advance, trying to make the hours we would spend on the train not that long and tiresome, I guess I had a very vague idea of what the trip would actually feel like. I was avoiding the cities I’d already seen and that was the main principle. But I was also trying to opt for those places which would reveal their history and give us the sense of getting a bit closer to the life of the region (ideally). Now that I look back to my selection I think that even with those cities that we didn’t enjoy immensely (like Omsk or Tyumen) we actually learned something that enhanced our overall experience. After all, each city or place we visited added up to the incredible puzzle that our trip turned out to be.

And you know what? Wherever we went there were three things that we noticed in common: the traditional Russian beverage kvas sold in the streets (it was summer after all), birch trees (apart from the Russky Island perhaps) and… Lenin Streets! 🙂

And here is the (entire) Trans-Siberian railway map from Wikipedia which shows you not only the extent of the way in km but also in hours. We only made it to the +5 h blue zone round Baikal on the train which leaves us 4 more time zones yet to explore 🙂 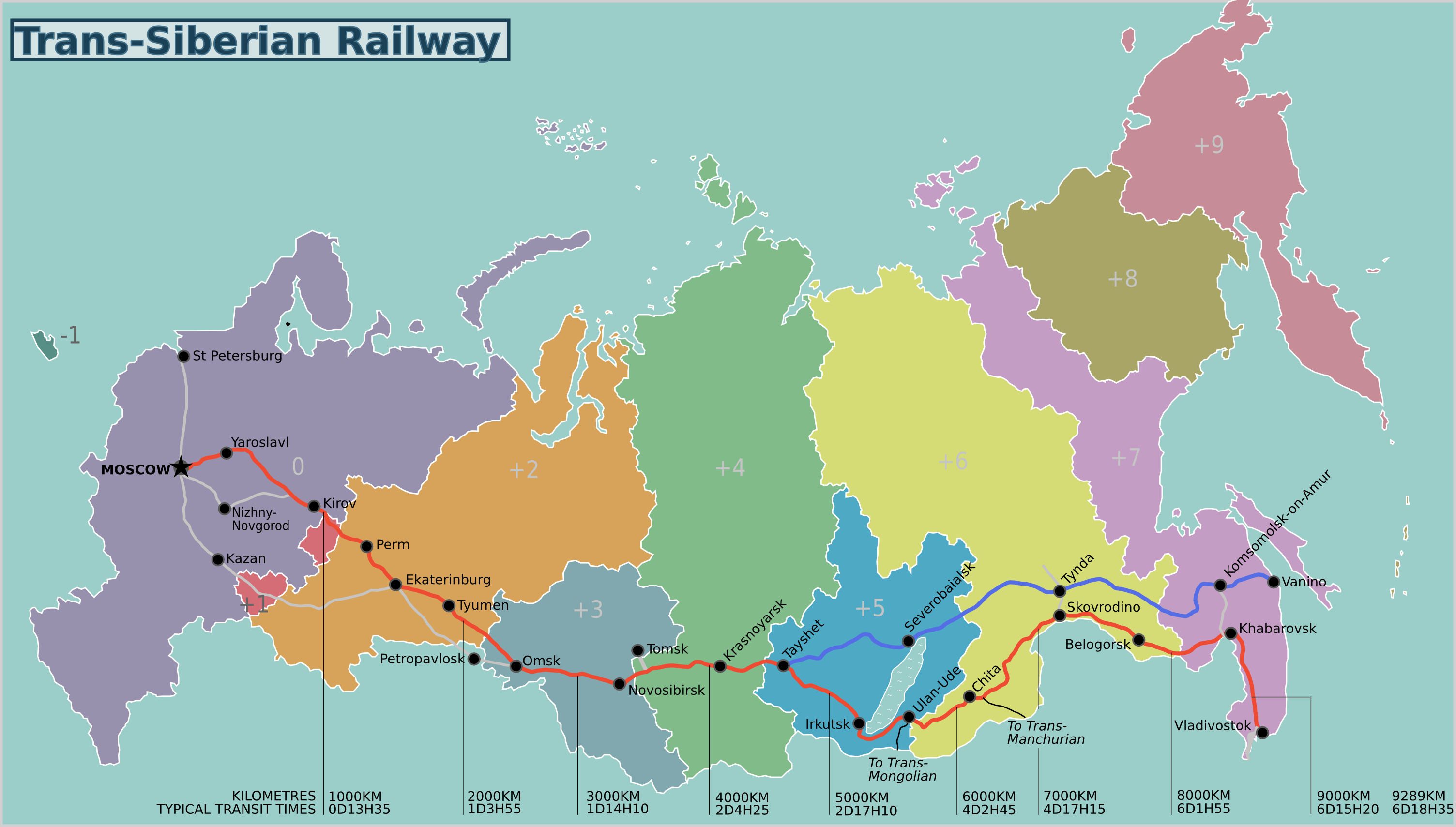 This post goes to my On Russia and Travel series.

2 thoughts on “Trans-Siberian Trip Part 10 and Last: 7 Time Zones Back and Roundup”