Veliky Novgorod, or Novgorod the Great, welcomed us with a cold and gloomy weather but the next day was it was sunny and even warm. A run across the bridge over lake Ilmen and along the tourist-less Kremlin walls was just what I needed! 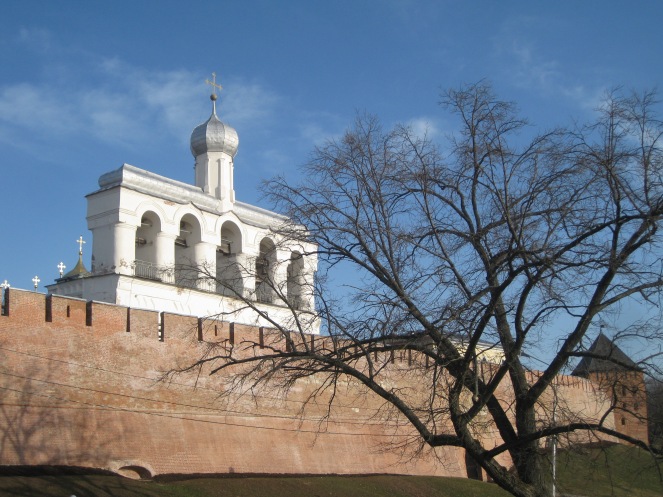 You somehow miss such moments in St Petersburg – because it is rarely people-free, there are no REALLY old places and the overall feeling is that of a European city rather than one in Russia. And that’s why this getaway to Veliky Novgorod was like a breath of very fresh air to me. Couldn’t get back to senses for about a week afterwards! 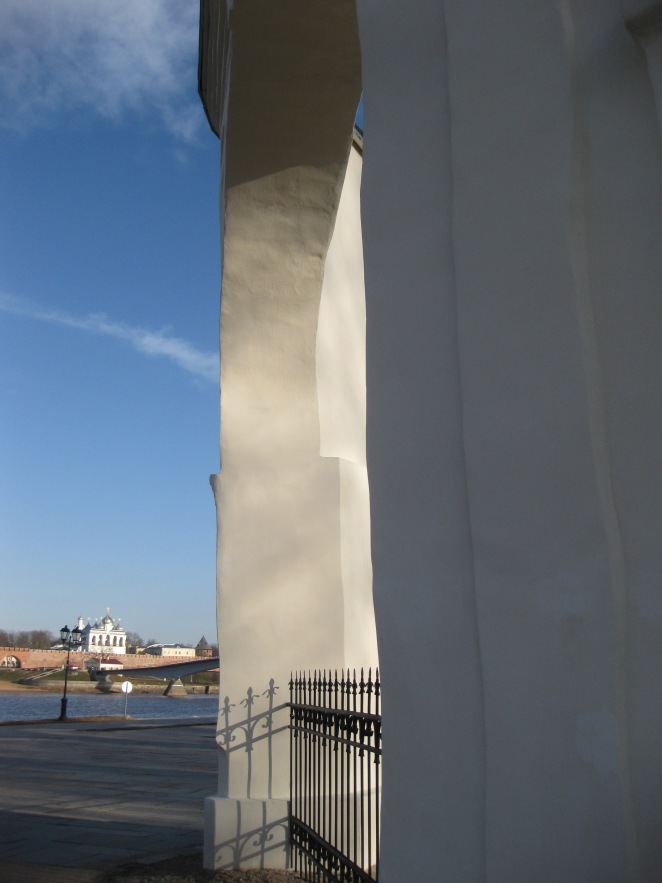 You can see the Kremlin to the left of the photo above – with its red-brick walls and the bell towers. The Kremlin has been upgraded and rebuilt over the centuries but as it was not destroyed during the Tatar-Mongol yoke, it somehow represents that old Russia which most of the cities just lost. 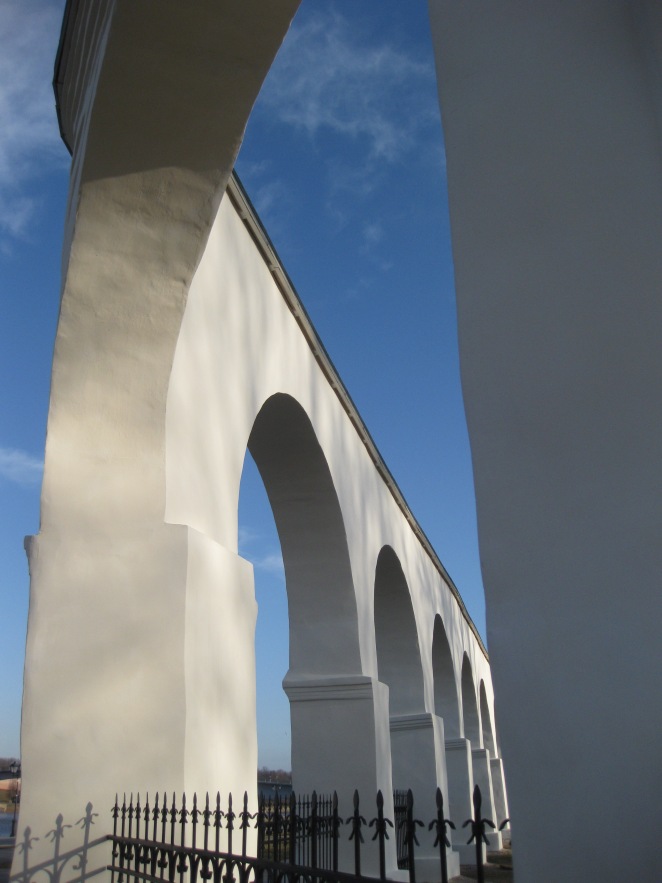 This white wall was reconstructed there where the merchants would sell their goods, on the Merchants’ Side, opposite the Kremlin. The Ilmen lake and the Volkhov river provided the water way needed for the development of the trade.

Veliky Novgorod was rich and independent until Moscow took over. It traded with the Europe and the East. And it was a republic too!

The next day after we arrived I took a picture of the same place in much better weather circumstances. This bell tower is right in the middle of the Novgorod’s Kremlin:

Veliky Novgorod is the land of churches. Of all sizes and centuries. This tiny church is on the Kremlin’s territory too:

And I think I like it more than one of the oldest stone churches in Russia, St Sophia (11th century):

This one (on Ilyina Street, away from the Kremlin) is just like a rocket in a mist 🙂 Although that was not exactly a mist but the smoke coming from some spring-cleaning in the nearby courtyard. We tried to bang on the door but no one would open, so we called the number indicated on the door and got inside to see some Theophanes the Greek‘s frescoes.

Opposite this church is this monastery. With wonderful architectural decorations. You can tell these were HAND-made. Unique!

And even random architectural forms in the courtyard of our hostel (which occupies a quite old building too) do remind you of a church: 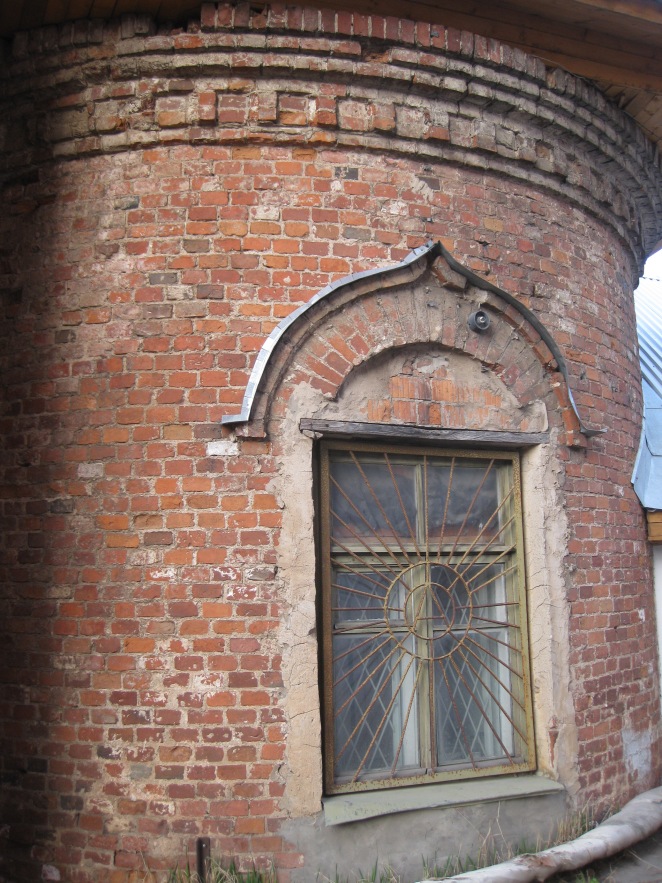 Well, not to mention that some citizens of Novgorod the Great actually LIVE inside a church! This one is St Ilya on Slavna, transformed into a residential building in the wild atheist times:

Last time we were there in 2013 and there were cats looking out of the window. This time we were observed by a local instead. The building is just mind-boggling.

Nice combination of the rusty brick color with the grass. 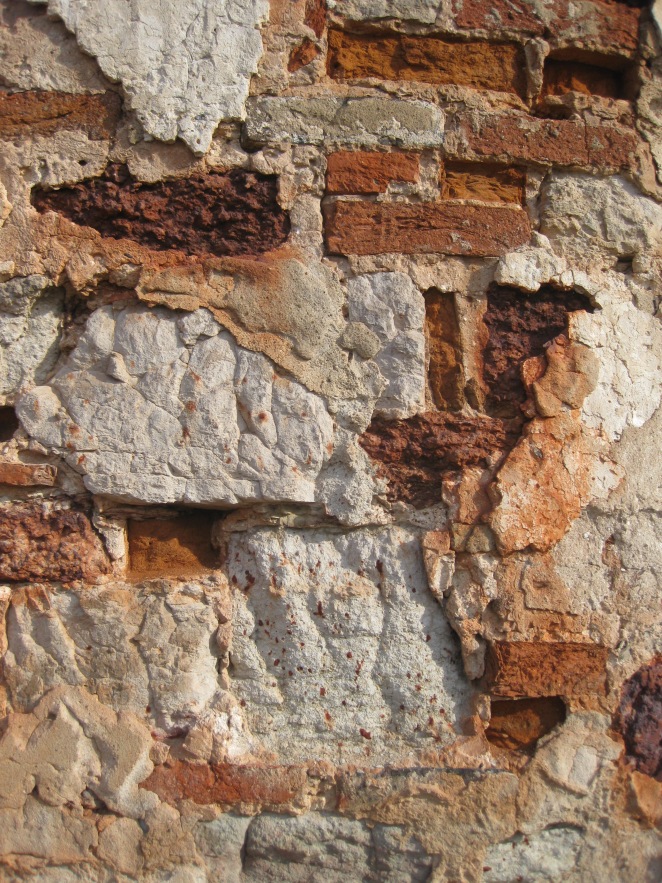 Another example of architecture blending in with the nature (and vice versa):

Some Moscow-style architecture for a change, with a pink-colored church in the background: 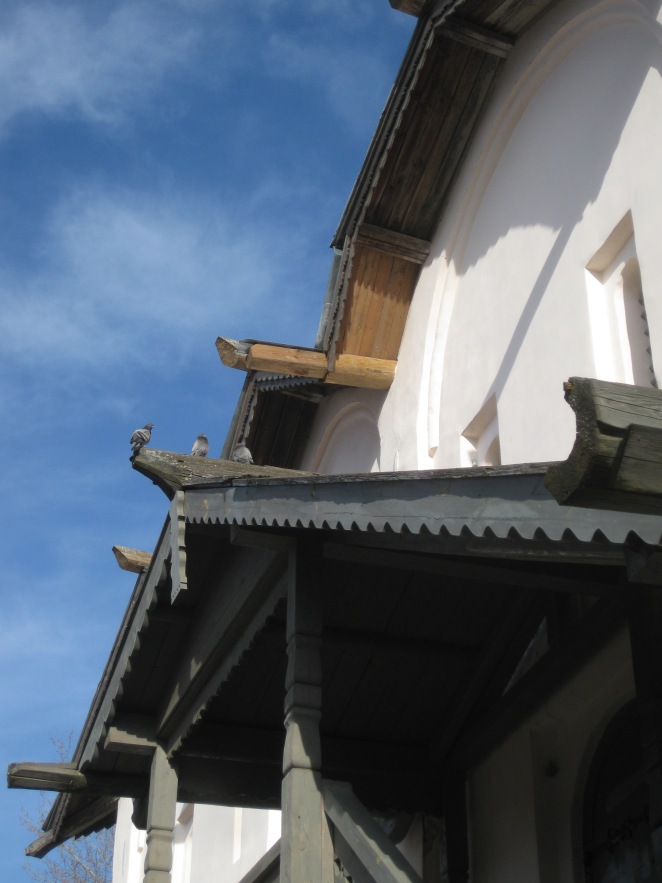 Another rocket-like church, with a later addition visible to the left:

This is a church in Perynsky Hermitage. Similar windows with small circles and the inevitable signs of the civilization 🙂 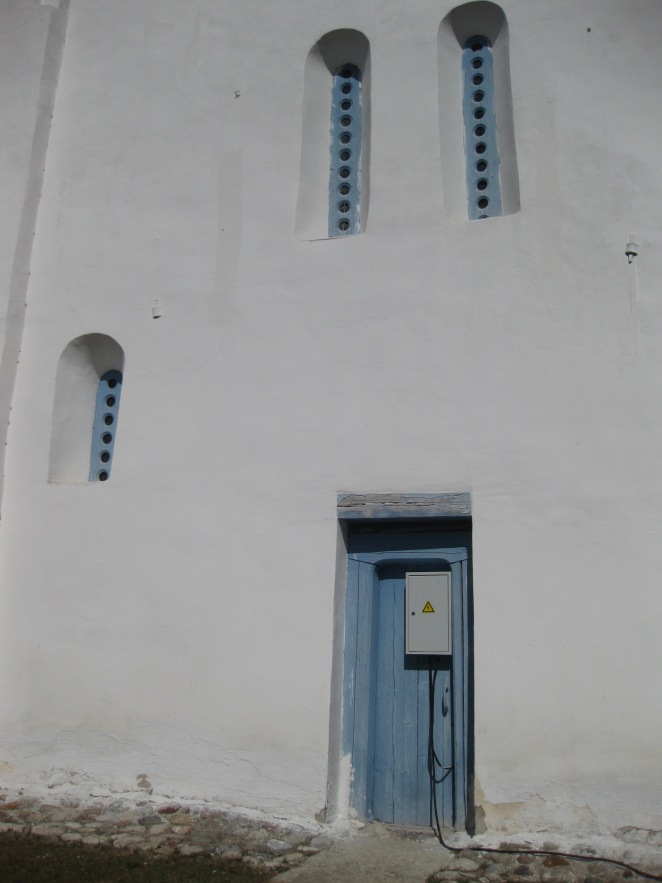 The Perynsky Hermitage stands on the Ilmen lake, where we spent some time enjoying the pine forest and the first signs of the spring:

And this is a different type of Russian churches, but the one which persisted the most. This is Vitoslavlitsy, an open air museum with all those log houses and churches collected all over the region to make an entire village.

You can enter almost all the residential buildings and see what’s inside.

The interior reconstructs mostly later centuries but still you can get a feeling: 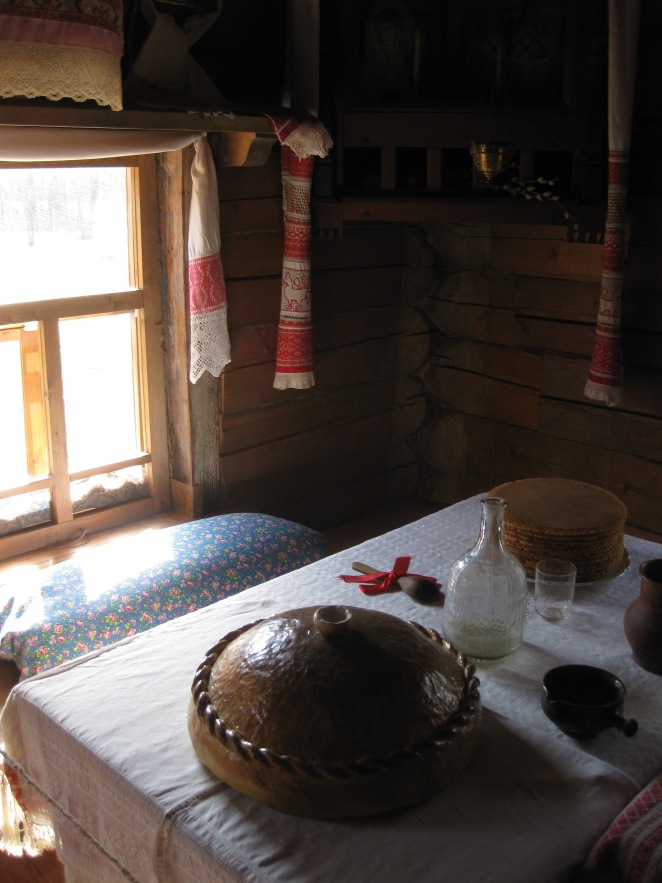 This long stick is a proto-lamp:

The Russian stove which was the first thing to be constructed when a house was being built, the place for baking, cooking…

The so called “red corner” – for the icon, the beautiful hand-woven and embroidered towel and a lamp. During the Soviet times this expression got a different meaning – the place for Soviet propaganda power in a building. 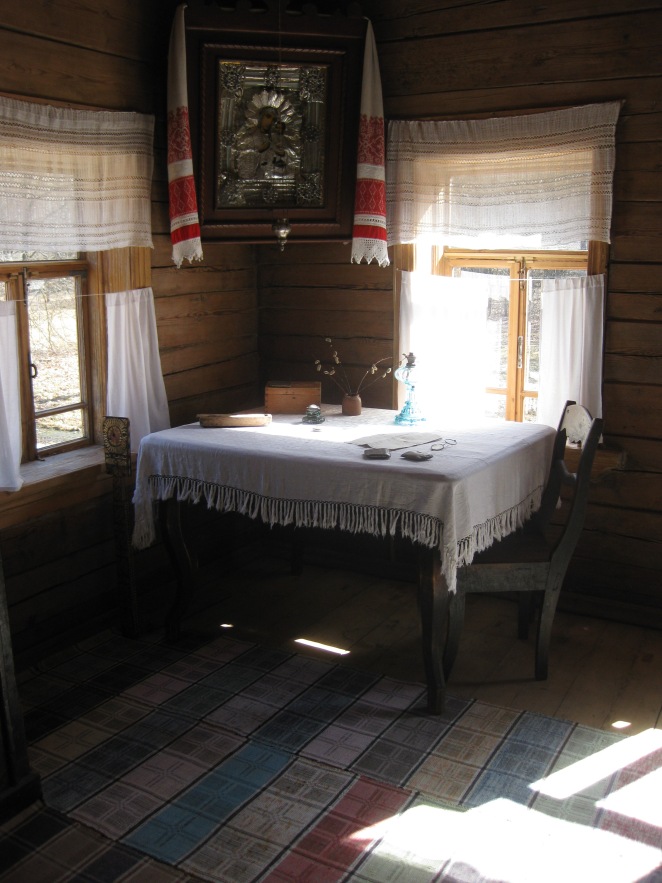 We didn’t have much time there but I could have stayed longer.

Very cozy. Although a traditional Russian isba (the word comes from istopit, to heat) would be heated po-chernomu, without a pipe letting the smoke outside of the building (hence the dark walls) – all this combined with small and low windows.

And the windows from the outside:

And some more churches before we leave Veliky Novgorod: 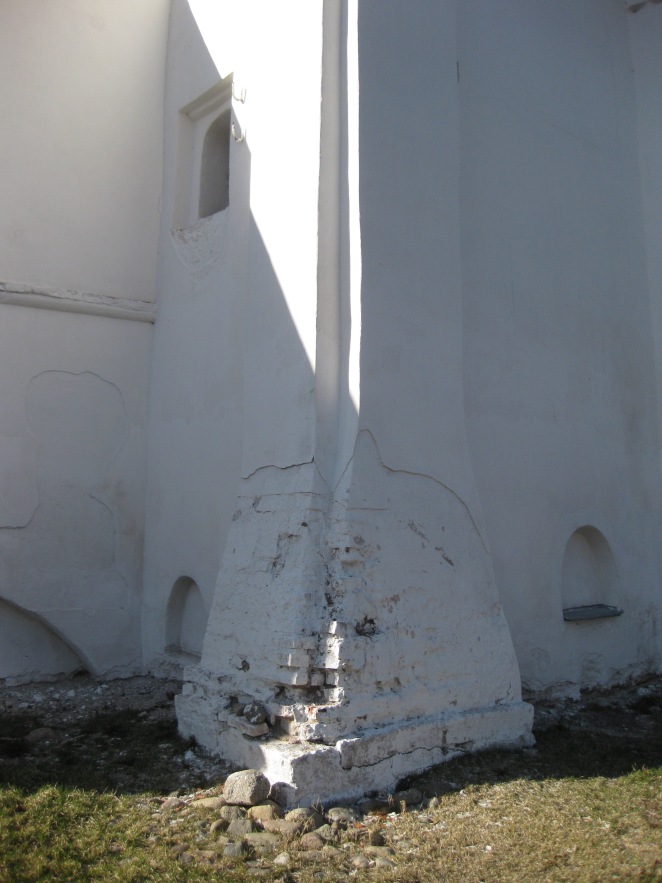 As you can see, I’m much more interested in their architectural forms than in what they represent:

For me they represent the history, the tradition and the people. And the connection to all of it through the centuries.

More of the rusty colors. Looking good in the sun. After just a couple of centuries 🙂

The lace-like decoration of this church reminds me of a traditional hand-woven towel. 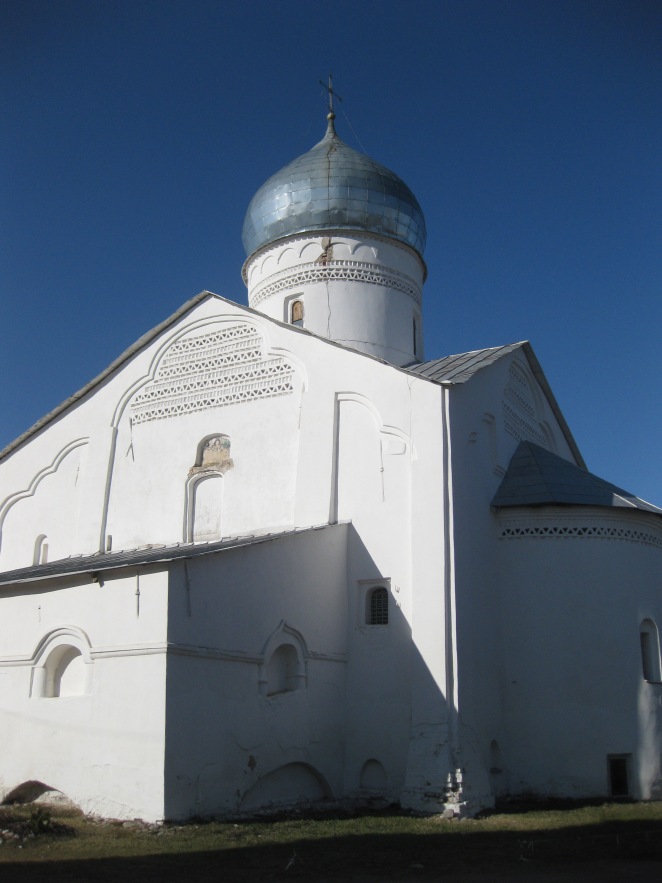 So white and decadent. 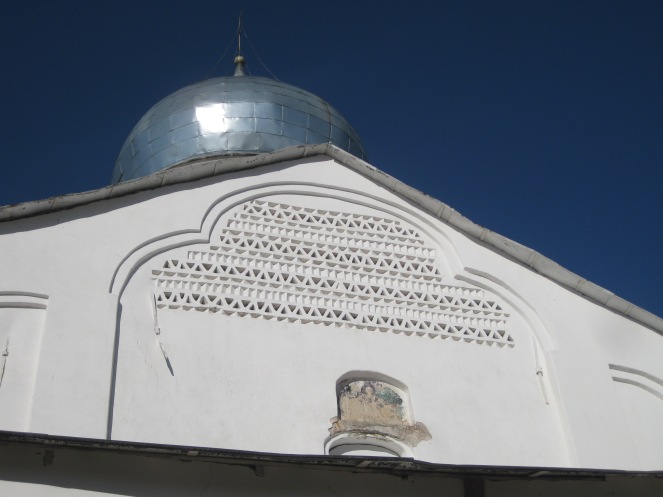 Hope I could give you an idea of a – well – real Russian city.

The weekend was great. Miss travelling and learning about my country!

5 thoughts on “A Getaway to Veliky Novgorod”