This post is not going to be filled with pretty pictures, I warn you. It is about the legacy left by the previous times in our family kitchen, particularly at our dacha place, which is a sort of an attic for the forlorn things which await the moment of … well, that long overdue moment of parting with the thing. Let me explain.

Everything made in USSR was made to last. Because USSR itself was supposed (not supposed, but WAS) to last. Planned obsolescence was obviously invented somewhere beyond the USSR. Including the in-flexible footwear that will never ever wear out. And the sturdy household objects from metal or plastic – coming from the assembly line of former (and perhaps simultaneously) military factories. We still have the fridge from God knows when (Mom says it was bought in 1968…), making so much frost and freezing at its lowest so well that we just let it be, who knows for how many more years ahead. Not mentioning all the meat mincing machines which you could make horror films with – and use them as weights as well. Ha, my favourite thing was the old vacuum cleaner called Vikhr (Whirlwind) – and it did sound like a tempest, although the dust remained. Actually what was great about it was that you could sing every time you tried to clean the house with it, oh and how loudly you could do that, better than in a shower! The TV sets – awful, with ridiculously elongated bodies of those on the screen which could only be mended by making them all look like eggs. What else… Sure enough there were such things anywhere in the world back then but no one will deny the existence of something particular to all these Soviet goods.

A year ago – Sourdough Bread with Dates and Flaxseeds, I remember it was very good!

This is just a selection of kitchen-related things I photographed back in May at our dacha. I will try to tell a short story of every object portrayed.

This first thing is actually not Soviet at all, I just wanted to show you one of the traditional Russian kitchen … tools, cause this one will build muscle for sure. This is called mutovka (literally – a mixing thing) and it was made by one of my great-grand-parents from a twig. Other possible materials – horn (don’t ask me how). So it is a predecessor of a mixer and a sort of a hardcore whisk. You can tell it was used much. Same as were and still are these teaspoons 40 kopecks each (probably made at the factory where my grandparents worked). Yep, the price was obligatory indicated on almost anything. So, hard to imagine knowing exactly how much every good costs? Well, people did, actually. There was also this thing in those self-service stores in the USSR when the customer had to remember every single price (especially lovely with things sold by weight) in every department and then tell them all at the cashier’s desk. I wish I could do that, but I just recall I was afraid of going to some stores which had this very (memory-testing) process still running. 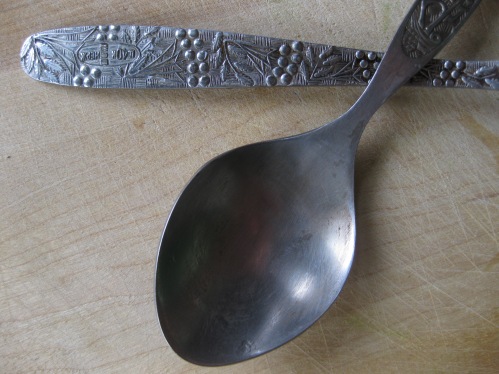 Everything made in USSR was made to…be the same. There are even entire movies based on this fact that people owned and were surrounded by the same things starting from furniture and keys to flats and, well, block of flats – they all looked oh so familiar and… the same. But, seriously, if the prices for the goods in the USSR were artificially kept at the same level for years on end, why bother changing these goods? Mom says if prices ever went up it was discussed everywhere by everyone and it was a shock. So, come back in 10, 20 years and buy your children the same product! No headaches with design, better packaging (here is a curious topic by the way, probably nothing more environment-friendly than the Soviet packaging…) etc etc, how nice eh?

Everything made in USSR was made … in USSR. Or in one of the so-called Soviet-friendly countries like the Eastern Germany. 100% patriotism. The design or whatever might be, well, stolen from somewhere else to create an object but it was made proudly IN the country. The factory stamp you see above is of a Dutch ware factory in Tver (this website places its production between 1946-1950), and the plate itself (with some flower pattern on it) belonged to my Mom’s grandmother. Yes, there are things that you never throw away. 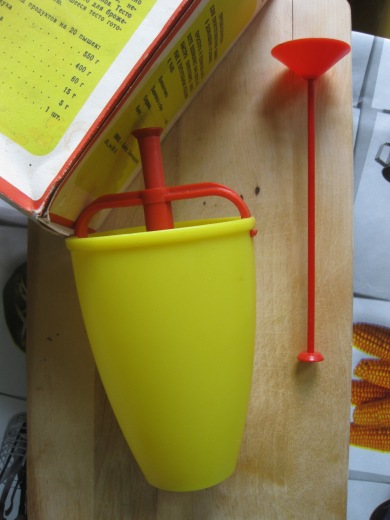 Like this one – bought somewhere in the 80s actually this thing is supposed to make pyshki – donuts. Well, I tried… but the batter keeps escaping from the thing and it is then all over the place. But what an idea 😉 The thing is called Pyshechnitsa – and the packaging design is definitely the same as it was with all the previous editions of this apparatus : ) By the way, we still have this Pyshechnaya eating places where you’re served several pyshki on a plate, dusted with sugar and a cup of something hot. Used to be and still remains one of the cheapest options for a snack. Traditionally our variant of donuts are not filled and are normally fried (and probably that’s why I don’t like them, I prefer everything baked, isn’t it much easier in the first place?).

For the Soviet cookie dough cutters and the packaging design go here. Below are the aluminum forms to bake ‘nuts’ which are to be filled with walnuts (when mass produced – usually with sweetened condensed milk inside), also from the 80s. I tried to bake madelaines in them – it worked but the shear joy of scraping the dough off these tiny forms, well, I’d rather avoid it. The recipe is quite Soviet – egg yolks, flour, margarine, soda and salt + ground walnuts, sugar and whites for the filling. I remember my Granny used to bake also ‘mushrooms’ – a more complicated process involving baking the stem and the cup and then filling them and sprinkling with nuts… only for the Soviet housewives ready to consecrate so much time and effort for an elaborate sweet treat… 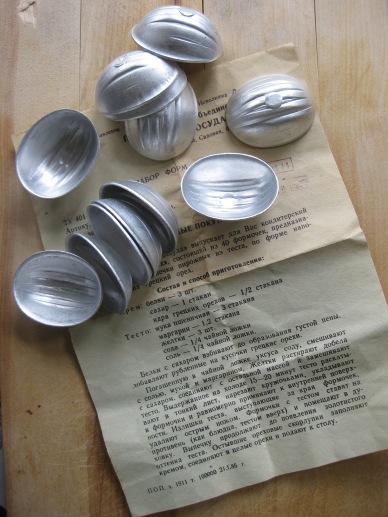 This rusty object below is related to preserving fruits and vegetables – a commonly used hand jar seamer. They say it was invented by a Russian scientist in 1881, wow. Preserving fruit was and still is a preferred way to liven up a bit the variety of food during the winter – for which purpose you either bought raw fruits and vegetables or grew your own and then dedicated entire weeks for the process. Now it’s more for some delicatessen like canned cucumbers or mixed ‘winter salads’ that a family would venture out to preserve food, but it used to be an almost exclusive option for lots of families during the Soviet era – there were hardly any fresh vegetables around in winter. My grandparents are still so much into preserving that their apartment turns into Ali Baba cave in autumn. And then we get disapproving glances from them as we tend to eat less and less of these things each year. 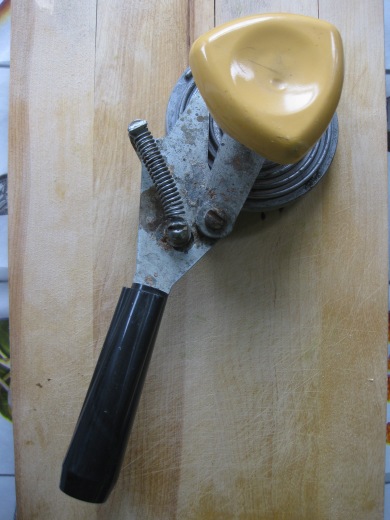 There are really very fine and sophisticated crockery and cutlery preserved at my grandparents’ place which I remember being not allowed to play with, just looking at them through the cupboard glass (one of the staples in a Soviet house – a huge cupboard to put all your crystal ware well on display). There were the gift sets for special occasions which people gave to each other for the lack of anything else worth giving. But mostly I do associate Soviet crockery and cutlery with something rather bulky and heavy and not very nice. Something from a stolovaya (canteen) with uniform white plates bearing a stamp of Obshchepit on it (public catering). The same applied for the bed linen in the hotels, hospitals or on trains for example, everything stamped.

This plate is supposed to be some kind of a special-occasion tray for fruit probably. We had a whole set in this style. And further are some decorative patterns from Domovodstvo (Home Keeping, 1959), a true book of life. Its battered cover is the first photo of this post. Apparently bought to keep up with the new born baby (my Mom). It’s a comprehensive for those times collection of various tricks, rules, recipes, patterns and other useful information for a housewife of the 50s. A more how-to-feed-your-baby-centered book of the same period is this one. 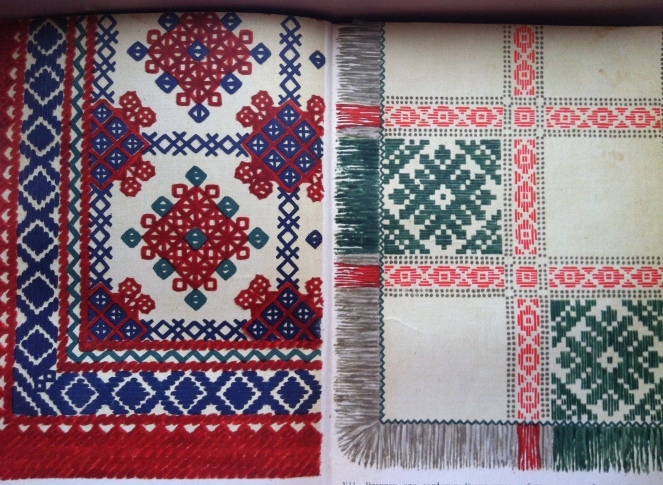 I have just one thought which might probably not seem that clearly inferred to you – how different the mindset must have been! And what a tremendous change were the 90s… It’s just that there was this familiar ever-repeating itself secure life and then, pooof, nothing, everything had to be decided, chosen yourself. Take the prices for example – I remember there were those talks in my family and around me back in early 90s that the cheapest something could be bought there and for another thing you should go in the opposite direction – and they did go there. And all this after years and years of knowing EXACTLY the cost of each thing EVERYWHERE (it’s true that the country was separated in ‘zones’ with slightly different prices but within one city / region they were the same).

For more stories and memories related to the Soviet times see this page.

And finally – elektrichka! Just for a change. These are of course just people impatiently waiting for the commuter train back home at the central station in St Petersburg, but you can spot the train coming there in the background. Imagine the situation in the morning in the direction of the city – I remember having to miss 2 trains in the morning because I just failed to get physically inside. But there are so many things linked to the commuter trains, like having time to revise before exams, to read books, to call aaaaaaaaaaaaall your friends (remember, there’s also the way back!), to talk to the fellow commuters, to play, watch films, listen to all the podcasts at top volume to cover the noise and the ever-present vendors or musicians, and just look outside the window (the view is alright in summer). I know people who met their boyfriends (and possibly spouses) on elektrichka. Such a sociable place!