Our summer this year is quite St. Petersburgeois – changeable to the extremes, mostly moody and rainy in June and now – cannot believe it’s already July! – it’s unbelievably hot! Well, by HOT I mean +26 ‘C.

In order not to linger with this post any more, I will shortly tell you about the most uncomfortable every-summer phenomenon of the Soviet and post-Soviet life which we have been dealing with for already two weeks – the cutting of hot water supply during at least two weeks in a row… oh yeah, veiled as a preventative measure, this is the most awkward thing you can think of =)

But for the sturdy experienced Soviets and post-Soviets this is no problem, really. We do grumble and stumble over the pots and saucepans filled with boiling water (then you mix it with the still running cold tap water and take a shower with one hand holding a saucepan). The cut happens each summer for 2 weeks, usually during July when the weather is hot (even here, in the North, would you believe that?) and one does not need hot water that much. The various districts of a city have their own scheduled cuts, so for a comfortable life one has to have friends at least in a different district  =) or you can use a public banya (kind of sauna where you also wash your body), but we prefer to just heat some water. We used to have a costly heating apparatus looking like a vodka distilling machine… it’s already dead now so we’re back to the good old method. Ah, yes, we also have a small heating thing that you fix right onto your tap and plug it in, so the water running from the tap is quite warm (although I always dangerously forget about NOT turning the water off before plugging the thing out!).

The water cuts in all other seasons were a usual thing for the Soviet times, now they have become quite rare. We also have power cuts, of course, but these things, well, all Soviets are used to be deprived of the commodities for some time. We are sturdy, we will survive in any conditions (well, at least it’s this general opinion about the Soviets people that they can easily get used to any conditions and are not demanding as far as the comfort goes).

But surely we all need to eat, right? So here is a wonderful bread I have been meaning to share the recipe of for some weeks already!

Welcome Sourdough with Dates and Flax adapted from the original recipe at mydiscoveryofbread.blogspot.com will make a very soft bread with lovely sweets dried fruits inside.

I did make some changes (who would ever doubt?), like changing the original figs to dates, adding rye flour together with rye bran, using more flax meal and mixing water left from boiling potatoes with warm water. 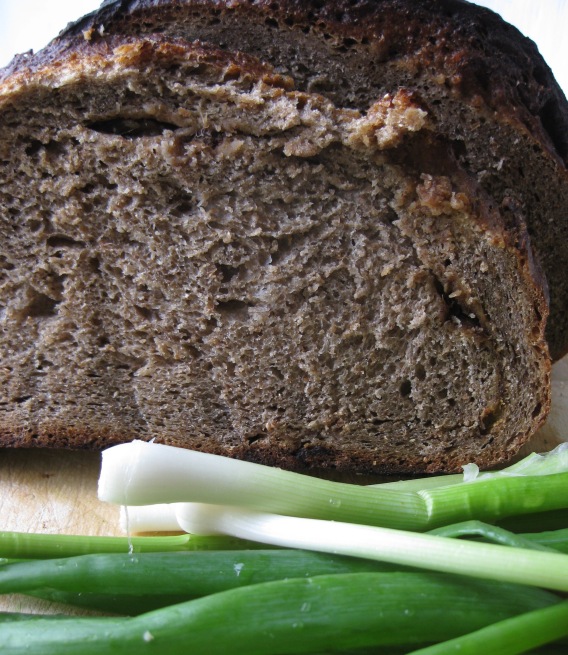 Then I followed the procedure as it was described and got as a result this wonderful bread which lasted (and was still soft) for some days just fine. Although it got burnt a bit on the top, the inside softness made up for it.

Not to linger even more with the post (my oh my, since the 25th of June already!), I’ll just publish it straight away.

Keep baking and take care of your elders if it’s hot there where you are, they tend to be very susceptible to the heat…